The last several Mondays have not been good for traders and tech investors.  Fresh off the heels of last week’s Amazon AWS outage and Nasdaq plunge, today’s fallen FAANG company is Facebook.   Every platform on the Facebook stack is down today, including Instagram, WhatsApp, Oculus, and many others.  In terms of the number of disappointed users worldwide, this is likely the greatest outage in internet history.

Even Y Combinator’s Hacker News was down or slow most of the afternoon.  Engineers speculate that the Facebook outage was primarily a DNS issue, and other DNS servers such as AWS were serving as a fallback from failed requests, running more slowly.  Fortunately, most Amazon and Cloudflare hosted sites were speeding along without any problems.  You can still find buy groceries on Amazon Prime, watch the rest of Squid Game on Netflix, or search for NYC Apartments for Rent.

If that wasn’t bad enough, Facebook is also suffering their largest 1-day loss for the year, down over 5% today at $325.  They aren’t alone – every FAANG stock is down sharply today.  However, Apple, Amazon, Netflix, and Google are down a more modest 2% to 3%, in line with the rest of the Nasdaq.  FB is almost twice as large a move following yesterday’s somewhat scathing expose. 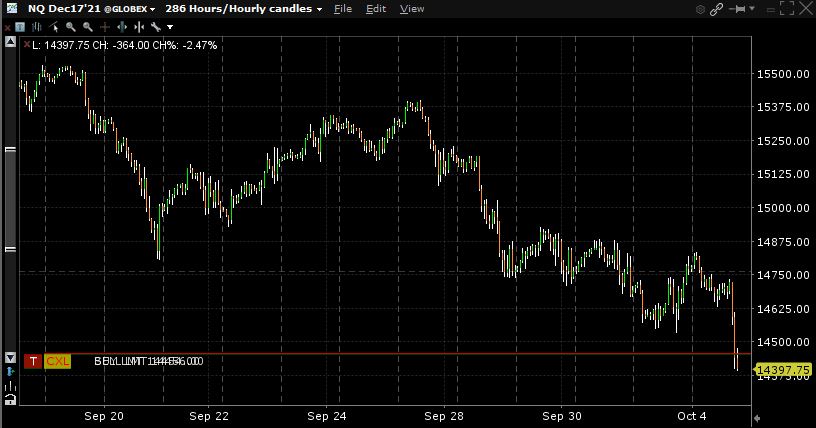 It’s been the same story the last few Mondays.  A relatively calm end to the week last Friday leads into an equally unexciting Sunday night with Asia markets opening.  Shortly after the 9:30am New York bell, though, a massive amount of selling begins.  Perhaps it is all tied to the China Evergrande incident, with lots of overseas capital reducing their risks.  Maybe this time the political game of chicken going on in Congress will blow up in a bad way.  Will some combination of all of these negate the accommodative Fed policies?  When was the last calm Monday in the markets?  You’d have to go back to September 6th.  Traders were all taking a break, thanks to Labor Day.

On large down move days, investors often take note of what is actually rallying.  Tesla stock is positive on the reports that they had record shipments in 2021 Q3, beating all expectations (although it had reached $806 before dropping to $780).  Crude Oil and Natural Gas also spiked to new highs for separate reasons.  OPEC+ claims they have a new era of cooperation and coordination that can help keep the market healthy (and profitable for them).  Bitcoin is rebounding today, shaking off China restriction concerns, with the anti-fiat crowd possibly preparing for a potential debt ceiling disaster.

One interestingly stable corner of the market has been mortgage REITs.  This asset class is often misunderstood despite playing an important part in the capital markets.  Almost all mortgage REITs hold mortgage-backed securities but leverage to magnify their returns and risk.  Even though treasuries bonds have had a volatile selloff in the past two weeks, the mortgage basis, the spread between mortgage rates and similar-duration treasuries, has stayed relatively stable. 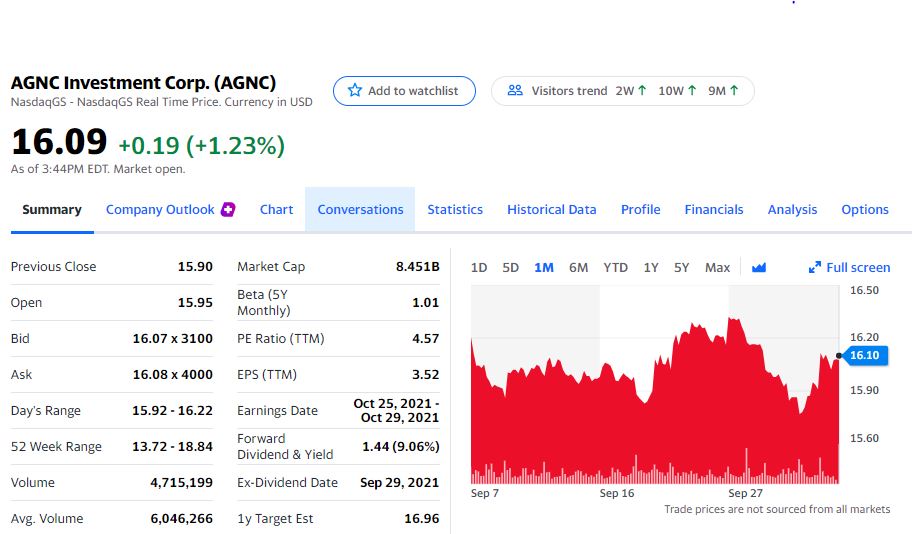 Normally these are high-yielding but volatile products given the amount of leverage they take on underneath the hood.  Inflation concerns and volatility would also normally impact fixed-income or high-yield assets, but not this month.  Annaly Capital Management (NLY), AGNC Investment Corp (AGNC), and iShares Mortgage Real Estate Capped ETF (REM), are all flat since labor day, still chugging along with their promised 8%+ dividend yields.  However, these are extremely risky assets.  As with many other high-yield products, they are often the first to fall during a downturn, and one of the last assets to recover.

Previous articleHidden Treasures of NYC: Washington Mews
Next articleLuxury 432 Park Ave Tower Sued Due to Thousands of Building Defects
YOU MIGHT ALSO LIKE
Beyond The Building