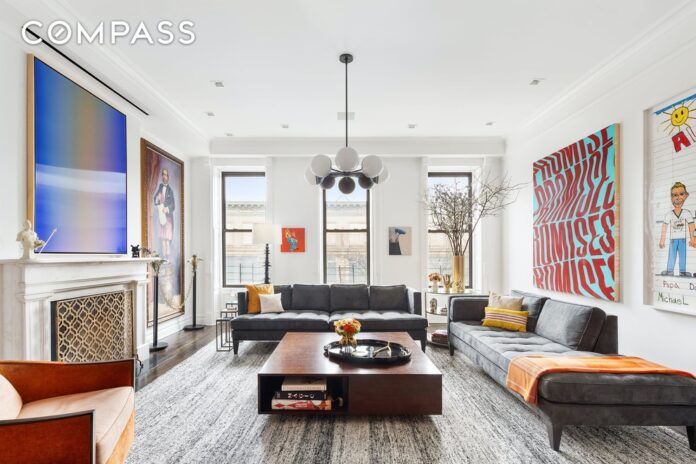 After five short years, Neil Patrick Harris and actor husband David Burtka have decided to sell their Harlem brownstone at 2036 5th Avenue. The couple seemed quite keen on the purchase back in 2016 during an interview with Architectural Digest. The purchase was quite literally the cherry on top of an epic year with many successes coming for both, especially Neil Patrick Harris who had just completed the last season of How I Met Your Mother and had just earned a Tony for his work on Broadway.

However, it seems the tides have shifted and somewhere along the way, the couple decided that the townhome was no longer their dream destination as it had once been. There has been much speculation as to why the sudden move.

The pandemic, a growing family, new job prospects, perhaps a combination of a few catalysts, but there’s no denying, they’ll have a hard time finding something as special and historical as their Harlem home.

Four bedrooms, five stories, six bathrooms, and over 8,000 square feet of living space, the home was a great place for both entertainment and day-to-day life. Not to mention, it has plenty of rich history and 2,000 additional square feet of outdoor entertainment space including a rooftop and deck with a jacuzzi. The home also features a library, which can be converted to an extra bedroom, an epic kitchen (perfect for Burtka, a former chef), a parlor floor featuring a music room and a salon, a movie room, den, and a top floor with Neil Patrick Harris’ hidden office.

Built in 1910 and originally used as a Bed & Breakfast and home for girls, the couple and their LA-based designer, Trace Lehnhoff, spent over a YEAR renovating this property before transplanting their family across the country to reside in it.

It now boasts touches that are unique to the couple and their kids, most likely resulting in a heartbreaking decision to sell in the end.

According to RealtyHop records for 2036 5th Avenue, they’ll be making quite the profit if they find a buyer willing at this price. They bought the home on August 5th, 2013 for $3,582,500, using the name “Hinged Trust” (making the buyer a little less obvious, as most celebrity buyers do these days). If all goes well, they stand to nearly double up over the 8 years!   However, their original 2013 seller also did quite well.  Leah Abraham and Antonino Settepani bought the brownstone in August 2005 for only $1,380,000.  Leah and Antonino’s holding period was almost identical at 8 years, but in their case, the home appreciated 159.6% during the period.  We don’t know too much about what happened to that pair afterward, except that they bought at least one much smaller unit at 180 Saint Nicholas Ave together in 2018.

Back to the stars, Neil Patrick Harris and David Burtka, where will they live while 2036 5th Ave is in open house mode?   Don’t worry about them, they have plenty of other places to lay low, including their East Hampton multi-million-dollar home.

Amazingly, we estimate an investor would still earn a positive cap rate when purchasing this property as a rental; quite rare for a home with such a high sticker price.  The key seems to be a VERY low monthly real estate tax expense.  Only $1,646 per month in property taxes for an 18-room brownstone?  With no other significant monthly expenses, an all-cash buyer could likely rent it out for at least $6K per month (probably much more, and add to that the celeb factor).

Unfortunately, even in the best-case scenario, it would likely be a 0.6% or so cap rate.  There are simply too many other places to stick $7M these days to earn a better return.  Still, for those who can afford the price tag (or a very large mortgage), feel free to reach out to Vickey Baron at Compass to schedule a showing.  The rest of us can only peruse the photos and dream.