HomeBusinessWhat the Metaverse Means for the Real Estate World
Business

What the Metaverse Means for the Real Estate World 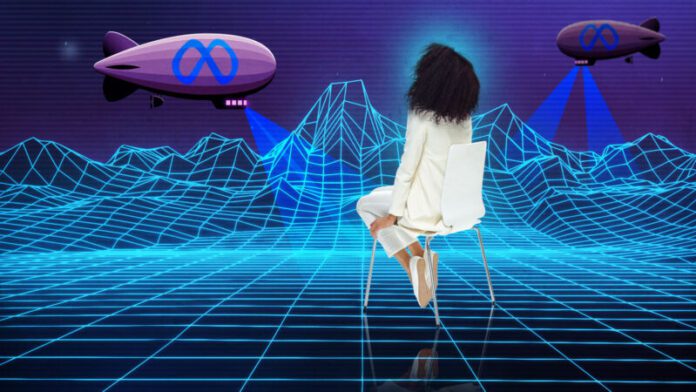 Now I don’t know about you, but this rendering of possible future office workspaces (seen below) in the Metaverse looks an awful lot like the liquid-filled chambers humans existed in, unconscious of their true reality, in The Matrix, to me. In the movie, Neo (Keanu Reeves) is given a choice between taking the red pill or the blue pill. The red pill will enable him to see the world as it really is, which has been mostly decimated and people are living totally unaware they’re in a completely virtual existence. The world, as they know it – is really just a highly interactive, 3-dimensional computer program. The blue pill will enable him to simply forget the fact that he might be “The One” to save humanity, and instead go back to the illusion that is the matrix. After all, at least everything is perfectly as it should be, in the matrix – and as they say, ignorance is bliss.

Here on earth, our new reality is the Metaverse – a theoretical landscape of the future – or is it? There are some pretty rich and powerful people telling us the future is now, one of them being the founder of renewing this trendy terminology; Facebook’s Mark Zuckerberg, who decided to rebrand his company name to Meta Platforms, Inc. (“Meta”, for short). His announcement came just prior to all the aforementioned headlines about selling multi-million-dollar virtual real estate in the Metaverse. The initial goal is to design (real) software, device hardware, and built-in capabilities and equipment that’s generally affordable to most people, so that we can all have a 3-dimensional, interactive (not real) experience when online. This alternative imaginary world is just that – it doesn’t really exist – but that didn’t stop investors from spending millions, recently, on “virtual real estate” in the realms of the Metaverse. It’s extremely likely to be the next new substance – or, actually, non-substance – of addiction, but on a massive scale. It’s described as a place to “live, work and play.” Well, what else is there? Again, The Matrix comes to mind…

What is the Metaverse?

Let’s back up a moment to explain exactly what the Metaverse is. The term Metaverse, incidentally, was first used by author Neal Stephenson in his sci-fi book Snow Crash back in 1992. Today, the Metaverse represents an online virtual world that combines tech from augmented reality, virtual reality, 3D holographics (think: avatars), video, and other communication methods as an alternative world to coexist in. One that seems nearly as real as this one. There have been hints of what’s to come in certain video games and there are even other online ‘worlds’ that exist already. But nothing that’s anything like this, according to tech giants like Facebook and Microsoft, both heavily involved – and invested. Zuckerberg is positively bearish on the topic and says that in 10 years, the Metaverse will be our new internet reality and available mainstream.

The first company to gain major interest from other investors regarding purchasing land in the MV was Republic Realm, a real estate development company – in the Metaverse. They own 2 (real) investment businesses focused on virtual real estate (not real), currently owning 2,500 spaces of land in 19 MV realms. Their record-making purchase was for land (not real) in the Sandbox, a Metaverse realm, for $4.3 million dollars (very real). Another Canadian company, Tokens.com Corp., had previously held the record for land purchased in Decentraland (another MV realm) for $2.5 million. They likened the investment opportunity to being able to purchase real estate in Manhattan as it was first being built. Republic Realm says it plans to collect rent on properties it’s developing, including homes and retail space. Incidentally, there are still zoning laws in the Metaverse realms, but no particular laws of gravity. Tokens.com is building a skyscraper in Decentraland, which they intend to sell space to lawyers in. My question is, why do we need lawyers in a virtual reality? But this is no joke, folks. This is potentially serious money. Those who interact in these worlds can already purchase yachts, paintings, and nick-nacks for their virtual homes, attend virtual concerts and events, even gamble at casinos, with cryptocurrency specific to the world they’re in. Interestingly enough, some listing sites even seemed to predict the rise of Metaverse and virtual real estate. 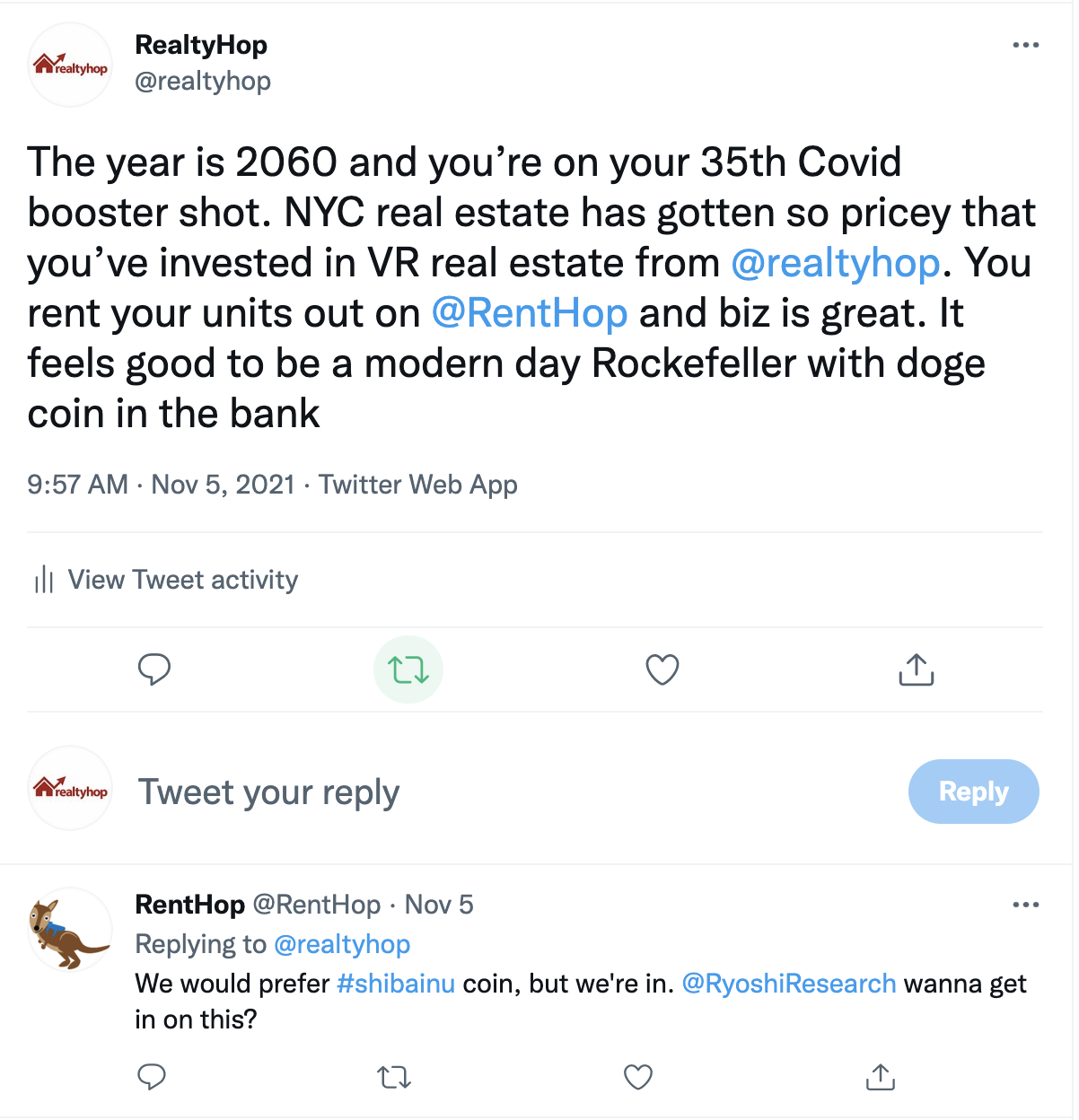 This is just the beginning, my friends – we are truly building our own version of The Matrix.

What’s more, another major new announcement included the agent superstar team from Douglas Ellman, the Alexander brothers. They became famous for their record-making deal in 2019 when they represented Ken Griffith, who purchased a $238 million dollar penthouse at 220 Central Park South. The brothers are apparently partnering with – none other than Republic Realm, to develop and sell luxury real estate in the Metaverse. They plan to focus only on the “trophy properties” located in the various worlds of the MV. In another shocker, the Caribbean nation of Barbados has announced plans to open the first embassy in the Metaverse, issuing visas and passports for travel. It would seem this all is reaching epic proportions.

The thing is, these alternate realities are run by cryptocurrency, and there are specific types created uniquely for each of these worlds. Some of them are called NFTs, or non-fungible tokens, which basically is the type you can’t exchange for anything else, like you can with, say, Bitcoin. They represent digital objects, often bits of digital art, videos, autographed Tweets (really), things of that nature. Some of them go up in value while others are worth little, if anything. They are only good in the MV, but they’re complicated. In any case, just like the virtual real estate you purchase in a virtual world, the investment risk is all too real. Using cryptocurrency that’s got actual value to buy virtual land is even worse, say some investors, and the very definition of insanity. Why? Let’s say the realm you choose to buy in suddenly crashes, or it’s not popular so it’s not profitable – there are countless reasons why or how it could happen, and it’s anyone’s guess – you’re risking everything, and can easily lose the entire investment. With actual real estate, at least you have something physically tangible that you can build on to recoup at least the majority of your investment if things go wrong. Or wait out the market. Not so, in the Metaverse. You enter at your own risk, and you take your chances. If risky investments like these make you nervous, it’s understandable. Real real estate is by far the better investing acumen. But the Metaverse remains a hot topic.

At the moment, the Metaverse seems to be just the latest opportunity to make mega millions. Which is too bad, because if we truly have an opportunity to build another dimension of a world to live a whole new life in – why not create a venerable Utopia? Doesn’t it make more sense to create a world with the least possibility of making the same mistakes as we have in this one? And also, do we really want people like Zuckerberg in control of everything important? We all already know that the people that have the most money, have the most power. But in a universe of the future we’re creating from the ground up now, shouldn’t the foundation be created by the people who will spend the most time existing in it? Maybe I’m just idealistic.

The real question here still remains: will you take the red pill or the blue pill?

From Dirty To Designed, How NYC Will Come Back Stronger

A Newcomer’s Guide to Alternate Side Parking

The History of the New York City Brownstone