What a Waste! New York City’s Trash and Recycling 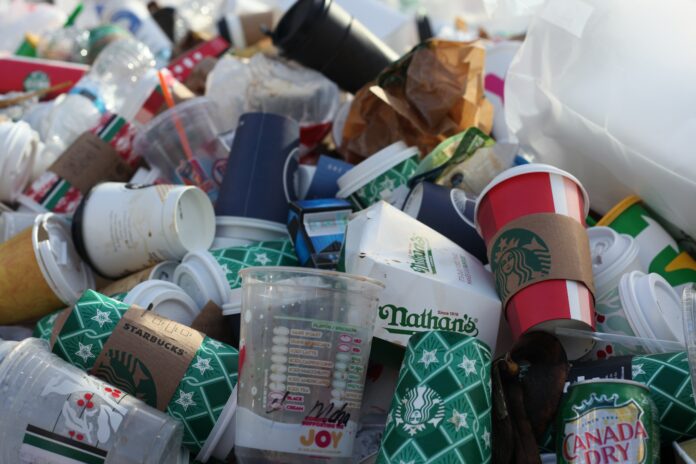 As the new year approaches, many start off with an “out with the old, in with the new” approach, which often means A LOT of trash.

It should be a shock to no one that NYC produces a lot of trash every year. 3.2 million tons of it to be exact. That’s a lot of lottery scratchers and McDonald’s wrappers, but where does all of it go? “Duh, Russell. Trash goes to the dump.” Does it though? Think about it. When was the last time you saw a garbage dump in the city? Exactly. You haven’t. Once your trash is out on the sidewalk waiting to be picked up, most people don’t really know what happens to it. Well, buckle up, friends. We’re about to go on a long journey just like your garbage.

Many New Yorkers don’t need alarm clocks because we’re often woken up at 5 am by garbage trucks. New York has over 2,000 garbage trucks that go around each borough collecting trash before the sun even rises. Once these trucks are full they head to one of several “dump stations.” Now, you might be thinking, “See? A dump! I knew it!” But, in reality, you know nothing. This isn’t where NYC garbage goes to live the rest of its life. This is where garbage is sorted for the next stage of transportation.

From here, several things can happen. One-third of the garbage collected from this facility will go to a waste-to-energy facility run by a company called Covanta, where the garbage will be burned and turned into electricity. While it doesn’t sound like an amazing thing to do with the trash, it’s actually incredibly energy efficient, producing way less carbon and methane emissions than if the garbage was sent to a landfill. This trash produces enough electricity for 46,000 homes, and the remaining metals and ash from the burning are then recycled for other uses.

But there’s an issue. Remember when I said this process is more energy-efficient than a landfill, but it only happens to a third of New York City’s trash? Well, guess what happens to the other two-thirds. That’s right! It gets sent to a landfill and most likely one that’s out of state. The trash from NYC can travel as far away as South Carolina, where it produces a major carbon footprint that is forced on populations that didn’t even create the trash that’s piled up!

Now, to be fair, this system is way better than NYC’s old method of trash dumping where we threw most of it in the ocean until the Supreme Court told us to stop. After that we even did some creative things with the trash we accumulated, like connecting islands and building out Manhattan with landfills. Eventually, we ran out of ways to play with garbage, so NYC had to resort to exportation. Now, none of NYC’s garbage is processed in the city.

“Wow, Russell. My garbage goes through a lot after I put it on the sidewalk. But what about my recycling?” I’m glad you asked! First, and foremost, NYC should be recycling way more. Only about one-fifth of NYC’s waste is recycled, which means a lot of recyclables get burned or go to those landfills I was discussing earlier. While some of these issues can be chocked up to individual apathy, the majority of said issues are systemic. There have been numerous recycling and composting programs that the city promised to implement, each with very ambitious goals. Funding for said programs has largely stalled. Additionally, while NYC requires property and building managers to sort recycling from trash, the violation for not doing so is about $25.

Infrastructure issues are widespread in the city, and not just for recycling programs. Many cases of illegal trash dumping have been brought to light in the city, causing public outrage. While the Department of Sanitation would love to do something about these violations, they are surprisingly hard to enforce. While nearly a thousand summons are dished out to littering Larry’s, it’s impossible for the department to catch everyone, especially when a lot of people doing the illegal littering are tourists.

Additionally, from personal experience, public garbage cans are very difficult to get on your street. For example, the person I’m dating has no access to public trash cans within a three-block radius of her. When we tried to call the city to get a trash can, they said not enough people complained about the lack of them. This problem goes far beyond her street, as many streets in the city don’t have public garbage cans, so people either have to carry garbage around or just throw it on the ground and ignore it. While the Department of Sanitation is trying their best, they simply can’t keep up with the amount of trash that is produced.

So where do we go from here? How do we fix NYC’s trash problem? There are many different theories. My favorite one, for how silly and cool it sounds, comes from a New York Times article I hyperlinked, saying that a series of tubes could suck our trash into compactors making for easy transport. This could make it easier for garbage to be burned for fuel and electricity. Personally, I’d love to build a few more neighborhoods out of garbage. Maybe make a few new islands? We could even extend Battery Park!

Trash in New York goes on an amazing adventure when it’s picked up from the sidewalk in the wee hours of the morning. Most of it does, anyway. A lot of it ends up in the street and a lot of what does get hauled away can be recycled instead of burned. In order to be more environmentally friendly, and for the street to be cleaner, more people and leadership need to pay attention to the garbage infrastructure of the city. While things are way better than they were in the past, “not dumping trash into the ocean” is a pretty low bar and we can always improve how we handle our trash.

Previous articleA Billionaire’s Affairs: Elon Musk
Next articleForest Hills Gardens (Queens) Neighborhood Profile
YOU MIGHT ALSO LIKE
Beyond The Building