The Squirrel: The New Age of Improv in NYC 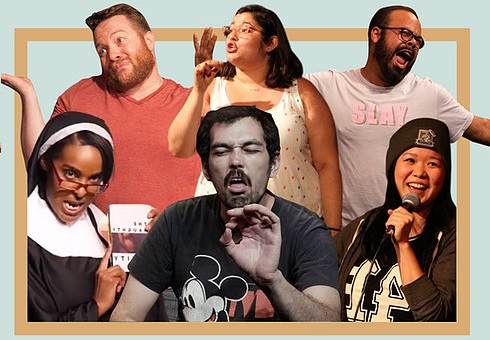 Update: UCB is under new ownership and is planning on a return to NYC sometimes in the future. The PIT has also reopened. The Squirrel now teaches classes in-person and has many in-person shows.

While the city might be reopening after the COVID-19 Pandemic, many of the city’s familiar institutions didn’t make it out on the other side. Comedy theaters and schools such as Upright Citizen’s Brigade and The People’s Improv Theater have disappeared, leaving an absence of improv and sketch in the comedy capital of the world. However, like a phoenix rising from the ashes, the performers and management of these once thriving theaters fight to keep New York funny.

One such group hit the ground running during the pandemic. The Squirrel theater and school emerged online; hosting shows over Twitch and teaching improv, sketch, character, and more over Zoom. They have since begun doing live performance at Caveat in Manhattan and are quickly becoming a tour de force in the comedy community. One of The Squirrel’s founders, Michael Hartney (former UCB performer and actor in School of Rock on Broadway) was kind enough to answer some of my questions about the founding and philosophy of theater.

Q: How did The Squirrel come together? What inspired your group to create the theater/school?

Hartney: Back in June of 2020, it became painfully clear that the UCB Theatre wouldn’t be returning in New York. It felt like someone had to create a space, not only for those creatively orphaned by the loss of that theatre, but for folks who were met with barriers to entry at that theatre. Six of us started chatting over email, and then Zoom, and eventually we came up with a name and a plan. So Squirrel Comedy Theatre exists to keep the comedic philosophy of The Game of the Scene alive in New York City, but hopefully operate in a more inclusive and sustainable way than before.

Q: That’s an admirable goal. And a bold one given the state of the world at the time. What was it like to start a theater during the pandemic?

Hartney: Weird! The six Squirrel founders never saw each other in person until Borabish’s first show at Caveat on June 5th, 2021. Working remotely, both in organizing the theatre and teaching classes over Zoom, definitely had its share of challenges but it also gave us one advantage: time. Knowing it would take time for in-person shows and classes to resume meant we could give careful consideration to what we wanted to do and how we wanted to do it instead of rushing.

And you can see the amount of care and consideration put into this venture. The theater’s founders are Hartney, Corin Wells, Maritza Montañez, Samantha Horowitz, Alex Song-Xia, Patrick Keene, and Lou Gonzalez. All comedic powerhouses. All UCB alumni. Given their insider knowledge of the industry, I was interested in how they would address the issues of their predecessors.

Q: You’ve worked extensively with UCB when it still ran in New York. What lessons did you learn from your work there? What will The Squirrel do different?

Hartney: I think our main takeaway that the training we received [at UCB] works, which is why we want to preserve that aspect while improving things that didn’t work so well i.e.: finances, representation, compensation, etc. A big difference is that artists will get a cut of the door. Nobody’s going to be making a living doing a Squirrel show anytime soon, but they’ll have a little extra scratch in their pockets. We’ve lowered class prices and increased ticket prices to relieve some of the financial burden put on students, while keeping shows affordable. And if you’ve received comedy training elsewhere, you don’t need to start over at Squirrel. You can take a class you’re excited about without having to take a bunch of classes you’re not.

The Squirrel’s mission is a clear and inspiring sign of change in the comedy community. Traditionally, improv theaters and schools have been competitive yet uniform in how things were run. For example, if you wanted to take classes at UCB but had training from The Magnet, you’d still have to start at the bottom of the UCB ladder and spend hundreds of dollars climbing your way up. And even if you made a house team, you still wouldn’t get paid. The Squirrel is aiming to change all of that, and it’s a change that should be applauded and applied to every comedy institution in the city. So, with all this innovation already set in motion, what will come next?

Q: How did you find Caveat? Are you seeking a more permanent space?

Hartney: We’re working on it.  As for our residency at Caveat, Kate Downey and Ben Lillie of Caveat reached out shortly after we announced the creation of Squirrel. Now Squirrel has a place to put up shows three nights a week, and Caveat can begin the process of recovering from the pandemic with less programming and promoting on their plate. We’re helping each other out.

Q: That’s good to hear! In the meantime, are there any upcoming shows you’re excited about?

Hartney: We’ve got RaaaatScraps starting August 1st, which will be a weekly improv show with killer casts and celebrity monologues in the spirit of ASSSSCAT 3000 at UCB. Acorns is our Monday night sketch comedy showcase hosted by killer sketch team Young Douglas. And selfishly, I’m having a blast improvising with Borabish every Saturday night.

And the place to look for these shows and classes is https://www.thesquirrelnyc.com/. New classes and shows are posted every week, so be sure to visit the site often. In the wake of COVID-19, New York is looking for a sense of normalcy and change. In the improv and sketch world, that change is The Squirrel. Be sure to check them out!

Previous articleBest Places to Work Remotely in NYC
Next articleDeadline Extended: 52-03 Center Blvd Housing Lottery
YOU MIGHT ALSO LIKE
Beyond The Building