The Life and Times of a New York City Rat

Rats! You know them, you might love them, and they are everywhere in New York City. If you go a day without seeing a rat in the Big Apple, you either spend all day inside or you’re just not looking hard enough. New Yorkers have many opinions on their furry little friends. Many of those opinions are synonyms for “ew,” but some folks like, and even study, these little guys. I, myself, thought they were cute until I saw one on the subway that could only be described as “too big.” But I’m a coward, so let’s hear from some of the braver souls who look into these Stuart Little’s.

A Rat Unlike Any Other

First off, you might think a rat is a rat, right? Don’t be ignorant. There are many rat species in this great world of ours. New York City just happens to be dominated by Norway, or Brown, rats. No one knows for sure when the first Nordic rats came to North America. I assume it was during the colonial period, but maybe a family of rats came over during the ice age or something. Either way, they’ve been reported in the city since it was called New Amsterdam, so they’ve been here a long time.

“So there’s only one type of rat in New York City?” Don’t be a fool! There might only be one dominant species of rat in the city, but within those species exist subpopulations with genetic distinctions based on where the rats call home. Specifically, in Manhattan, there’s a big difference between uptown rats and downtown rats. Rats can even be distinguished by neighborhood. For example, West Village rats might have larger than average teeth while East Village rats are more likely to go to an 11 pm improv show on a Tuesday. More studies are being done on these little guys every day, so we might even be able to distinguish between rats of separate boroughs.

How Many Rats Are In NYC?

“Wow! There must be billions of rats in the city!” I thought so too, but there’s actually way less than you’d think. Experts estimate that the city has around 2 million rats running around and causing trouble, though the pandemic could’ve changed those numbers drastically. In fact, during the week of November 10th, 2021, New York 311 had received over 25,000 reports. 2019 only had about 15,000 in the same time frame. Whether this is due to a population boom is unknown, but a more likely scenario is that the city easing COVID restrictions has driven mice back into the streets in ways that have rarely been seen. 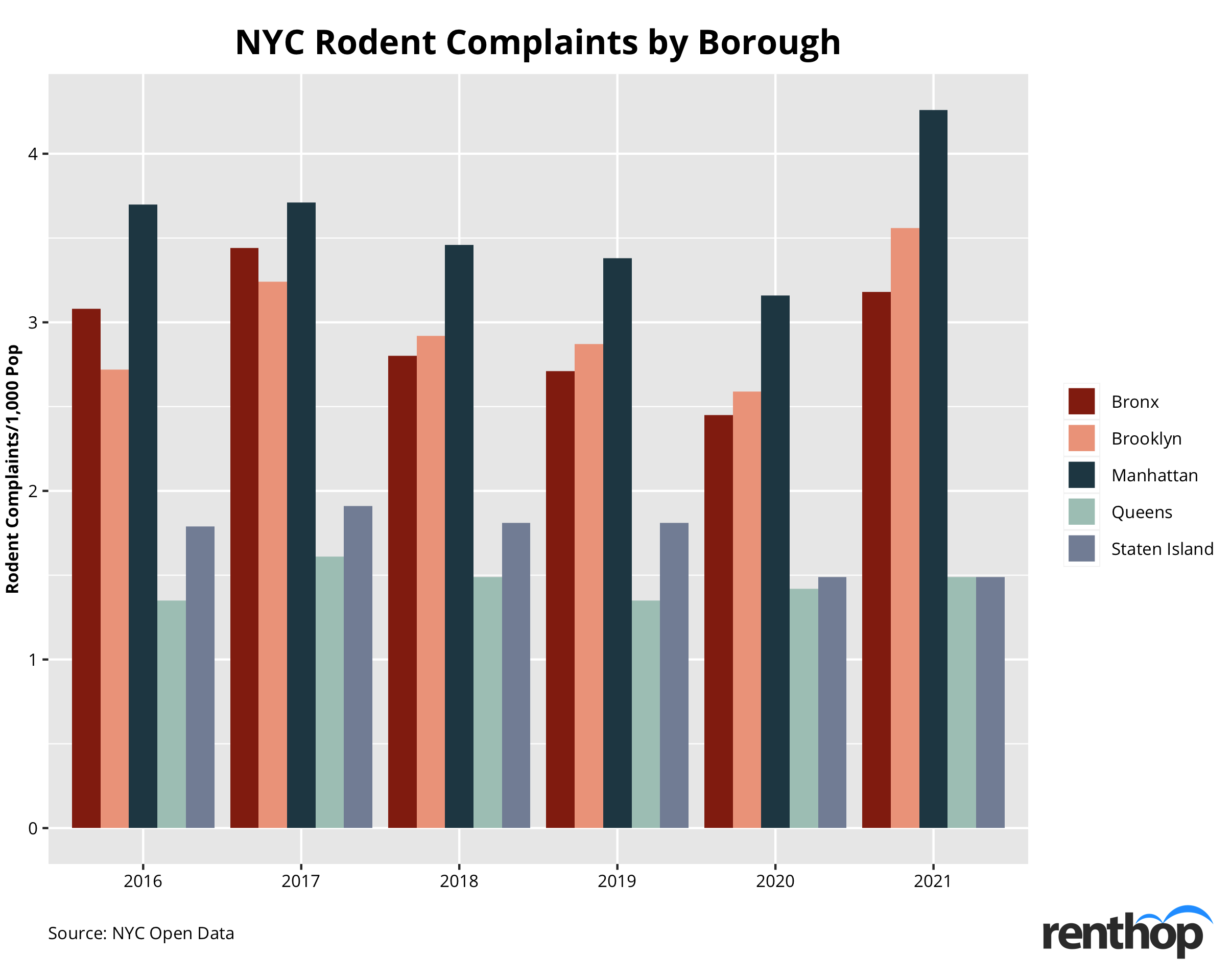 Rats prefer to hide and scavenge, which means the early days of the pandemic were a great time for the NYC rat! There were no angry people around, waste management was largely rolled back, and newly emptied buildings, due to pandemic flight, were available as a place to live. However, once things started opening back up again, it was a free for all. Construction started back up, driving rats outside and outdoor restaurant dining gave them a reason to stay there for some easy scavenging.

For some reason, people don’t like this increase in rat sightings, with entire websites being devoted to the elimination of the rascally rodents. Even the city government site has an entire page devoted to how we, as average citizens, can help fight the rodent problem. It’s easy to see why New Yorkers hate the little critters. There are some not-so-nice stories about them. First and foremost, they spread disease to people and pets. Second, they are big and bold. Rats can be up to 20 inches long and weigh two pounds. These hefty boys aren’t afraid of humans, as you would know if you’ve ever had one run across your foot on the subway at 2 am. There have even been reports of rats entering people’s apartments via their toilets.

“I don’t want a rat to come through my toilet!” I’d be shocked if you did! But it happens. The city has a number of ways to fight rats. The government website, for example, encourages people not to litter, to check for cracks in your building or home, and keep your green spaces free of weeds. Other methods for getting rid of rats are a tad more extreme like the vigilante group that travels around the city hunting them with dogs. No matter what the method is, the rats seem to still be winning the war on all fronts. Afterall, they’re small and crafty while we are big, clumsy, and prone to running away from them.

“Then how can we defeat the rats?!” Why do we have to defeat them? Sure they spread disease, but so do humans. Killing them clearly isn’t working either. Catching them is difficult as well, but they’d just come back, especially if we released them into New Jersey (Got’em. We love ya, Jersey. You’re a good sport). The best hope, as far as I can see it, is to study them, their habits, and their genetics so that we might be able to plan ahead for emergencies and better understand how to prevent the harm they cause. Otherwise, we have to stick with the dog vigilantes and they just seem like a lot.

Rats are a way of life in New York City. Whether you love them or hate them, they’re here to stay. Sure they eat trash, sure they spread disease, and sure they try to sneak up on you while you sit on the toilet. But on the plus side…honestly, I don’t really have one. They’re kind of gross. That said, I don’t think something deserves to die because it’s gross. Some gross things have a place in this world. Rats are one of those gross things, even if it doesn’t always seem like it. So don’t litter, look for cracks or holes in your foundation, and find a way to love and live with some of New York City’s smallest residents…Also, remember when I mentioned Stuart Little? Yeah, he’s not a rat. He’s a tiny person who just happens to look like that. Weird, right?

Previous articleNew Home Sales Dropped 2% in February
Next articleWedding Customs Around the World: Ukraine
YOU MIGHT ALSO LIKE
Community