HomeExperienceThe History of Ebbets Field: Home of the legendary Brooklyn Dodgers
ExperienceThings to Do

The History of Ebbets Field: Home of the legendary Brooklyn Dodgers

On April 15, 1947, Ebbets Field made history. Jackie Robinson stepped onto the field as Major League Baseball’s first African American player, changing the landscape for the better.

In the following years, the franchise saw incredible success primarily due to the playing of Robinson and the team the Dodgers had assembled around him. In 1955 the Dodgers won the World Series, which was also the impetus for the destruction of Ebbets Field. The stadium’s lack of size, parking, and usability was routinely overwhelmed by the large number of fans that surged into the gates every game day. To this day, Ebbets Field is warmly remembered by historians of the game and old-time Dodgers fans. 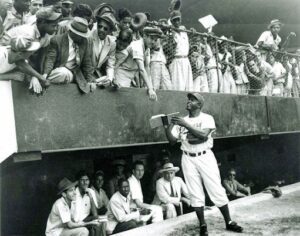 The History Of Ebbet’s Field

To this day, Brooklyn is distinctly proud of the Dodgers legacy. The team was founded in 1883 as the Brookly Grays. They were funded by a real estate mogul, Charles Byrne, and played at Washington Park on 5th Ave. In 1889, the team won the National League pennant and followed that victory by winning the championship series. To this day, they are the only team to win back-to-back in both leagues.

With their mounting success, the team changed their name to the Brooklyn Trolley Dodgers after Brooklyn’s most common mode of transport. But in a move that’s become common in New York City, the name was shortened to the Brooklyn Dodgers.

Soon, team executives began searching for a permanent home for the team. In 1913, they settled on Ebbets Field in Flatbush. Over the next half-century, Ebbets field would be home to some of the most iconic teams assembled in baseball’s history. 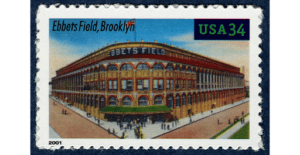 The first of these was “Dem Bums” in the 1930s. Under legendary manager Casey Stengel, the Dodgers won the pennant in 1934. For the next five years, they were widely considered to be the best team in baseball. In 1941, Ebbets Field and the Brooklyn Dodgers hosted the first televised baseball game. Of course, the Dodgers beat the Cincinnati Reds by the score of 6-1.

Five years later, Jackie Robinson entered the team, winning the Rookie of the Year award and forming a cornerstone for one of the greatest baseball teams of all time. The dodgers assembled an all-star cast around Robinson, including Pee Wee Reese, Roy Campanella, and Gil Hodges. In short succession, the team won five pennants but lost each of the World Series matchups to the Yankees. Finally, in 1955, the Brooklyn Dodgers won the World Series, vanquishing their greatest rival, the New York Yankees.

Ebbets Field was not only used for baseball. It was the site of boxing matches, wrestling matches, and other shows. Ebbets Field is even the birthplace of Bugs Bunny, who made his debut on July 27, 1940.

The Demise of Ebbets Field

As the team was entering their best years, Ebbets Field became structurally unsound. It had terrible plumbing, a small capacity, and no parking. As a result, the Dodgers ownership decided to build a massive publicly funded domed stadium. The problem was, the most powerful person in New York City, Robert Moses was opposed to this proposition. Moses wanted the Dodgers to go to Flushing Meadows (the site of Citi Field today) to build their new stadium. In the ensuing power struggle, Los Angeles approached the Dodger’s ownership offering a perfect site for a new stadium. For ownership, the decision was an easy one: they decided to move to a city that welcomed them and the titan they had created.

As a result, the Dodgers played their last game at Ebbets Field on September 24, 1957, before moving to Los Angeles for the start of the new season. Shortly thereafter, Ebbets Field was demolished by the city. This left a gaping hole in the hearts of Dodgers fans across New York, but nothing could be done. Critics cite this move as the change of the MLB from a fan-centric enterprise to one that focused on profits above all else. But New York City historians are quick to point out that Robert Moses had the power to keep the Dodgers in Brooklyn but ultimately chose not to.

No matter what side you take on the Dodger’s move to Los Angeles, the team has a special place in New York City lore. Today, they are fondly remembered for their daring decision to desegregate baseball and for their decades-long dominance of Major League Baseball.