Shen Yun: What The Flyers Don’t Tell You 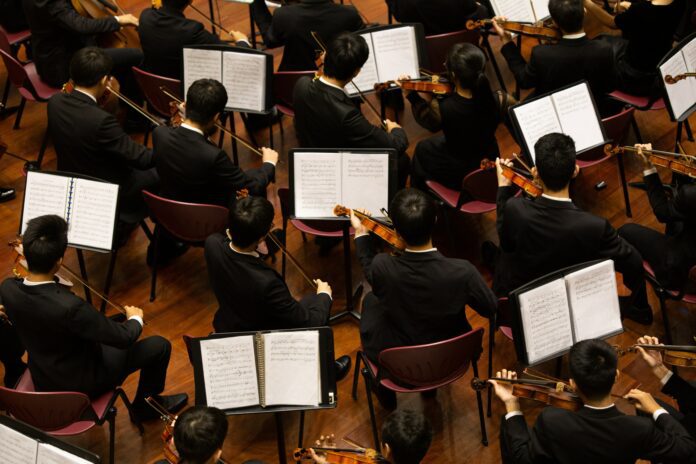 A Former Shen Yun Musician Takes You Inside Her Nightmare Experience

The views and opinions expressed here are those of the author based on their lived experiences and do not necessarily reflect the official policy or position of CitySignal.

On March 10, the Shen Yun Performing Arts ensemble will start its first-week performance at 7 PM. Running until March 20 at the David H. Koch Theater in New York City, Shen Yun is coming to town once more to delight its audiences. The tickets range from $162-210. The performance is truly a spectacle with beautiful costumes and gliding dancers.

Shen Yun (translation: the beauty of divine beings dancing) is a performing nonprofit established by Li Hongzhi, the founder of the Falun Gong spiritual practice (translation: law wheel practice) outlawed by the Chinese government. The Shen Yun performance ensemble consists of seven performance companies: orchestras, dancers, and singers. Unfortunately, while Li Hongzhi and his followers loudly renounced China’s anti-humanitarian practices and created Shen Yun to broadcast the history of Falun Gong martyrs, none of the funds trickle back toward humanitarian causes. In fact, Hongzhi’s estates only seem to prosper and grow, as do his land acquisitions.

Since the Chinese government frequently violates human rights without evidence, it’s hard to document the extent of the Falun Gong persecution. However, Falun Gong followers actively speak out against the government, protest, and hand out anti-government propaganda. In a communist regime, any movement (religious or otherwise) that gains momentum is a threat against influence. Falun Gong practitioners routinely protest against the government and are responsible for some of the biggest protests in China’s modern-day history. Sadly, the Chinese government is not known for its benevolence. Some sources claim the death of 2,000 Falun Gong members at the hands of Chinese authorities (allegedly killed for organ donations) with thousands more imprisoned/persecuted. These claims would be consistent with numerous allegations that the Chinese government kills prisoners (not just Falun Gong followers) to harvest their organs. Many practitioners have since been released, and some have remained imprisoned.

Numerous sources, including the US Justice Department and the Chinese government, characterize Falun Gong as a cult. Although not proven in a court of law, Li Hongzhi (founder of Falun Gong) amassed substantial wealth, allegedly dodged taxes, and exploited followers. As a result, former followers find it difficult to speak out for fear of retaliation. This spiritual organization also funds the controversial newspaper, The Epoch Times.

Founded by Li Hongzhi in China in 1992, Falun Gong contains elements of Chi-gong, breathing exercises, and accompanying physical movements. In addition, Fallon Gong is an institutionalized spiritual practice of self-improvement, or a path to enlightenment, to become like Li Hongzhi (founder), who is said to walk through the walls/levitate. While followers stop short of calling it a religion and Li Hongzhi himself downright refutes the term, the set of meditation exercises and Li’s book claim to focus on the principles of truth, benevolence, and forbearance (as described on their website). Exercises, meditation, and reading the book are mandatory, while other spiritual practices are discouraged.

When I first arrived for my audition, I was in awe of the beauty of the 427-acre compound in Cudlebackville/Deerpark, New York (about two hours from New York City). However, as much as I admired the beauty of the poor, caged peacocks inside the park, I could not help feeling alarmed by a lack of connection to the outside world. Even though I was there with an invitation, the armed guards at the gate waited until someone arrived to pick me up. So I had to leave my car by the gate and wait for my host. As we drove about a mile down the path, I marveled at the magnificent reproductions of Asian temples, a lake, the main concert halls, and residences. Inside the compound, you can find everything/everyone necessary for survival: lawyers, accountants, chefs, tailors, musical instrument repair, store, practice rooms, meditation rooms, concert hall, masons/builders, mailroom, movie theater, parking, and armed guards. At first, I was impressed, as I loved meditating, so this seemed like pure heaven and a beautiful place to be. Furthermore, my salary was in the mid-40s, which I considered a passable stepping-stone because I was still finishing my degree.

Rules and Regulations (spoken and unspoken)

About a month into my residence, heaven started turning to hell.
After familiarizing myself with the basic Falun Gong concepts, I could not believe how far away those were from truth, benevolence, or forbearance (alleged principles of Falun Gong). One would expect an organization that stands up for human rights not to discriminate. Both the book (and in practice), the spiritual movement is strongly prejudiced

Cult-like elements designed to control members’ lives were prominent throughout the practice.

Even artistic creativity and freedom seemed absent as pieces composed by Lee Hongzhi (a former trumpet player with a short-lived career at a forest police unit in Jilin Province, China) took center stage. Those were said to contain inherent spiritually enlightening characteristics. However, many professionally trained musicians will agree that those are rather simplistic and repetitive musical structures. The entertainment value of Shen Yun’s performances is mainly in the visual, drama, costumes, and dancing.

Not a religion (spiritual method/discipline)

The practitioners are adamant in refusing to proclaim Falun Gong as a religion. The meditation, spiritual practices, and reading the book are said to

My increasingly contentious relationship with the manager (exacerbated by me constantly leaving the compound, joining an outside gym, chatting with males and females alike, and having a boyfriend outside of Falun Gong) culminated around the time of my introduction to Li Hongzhi. He seemed aloof and stood there smiling, much like the pope in public celebrations (the pope generally looks more friendly). Since I was the only one who did not bow before him, I immediately stuck out due to my lack of reverence. Around that time, I started skipping all the extracurricular/fun activities such as movie nights and the like. Instead, after work, I would join fellow musicians in a restaurant and have dinner with a couple of glasses of wine. Following one of our excursions, a friend alerted me to spying/monitoring as she was given a speech about drinking and going out. My uneasiness increased since I started seeing cars following me whenever I would leave the compound.

Finally, one Friday, after the rehearsals were over, I packed a bag to visit my boyfriend. About 20 minutes into my drive, I got a phone call from my manager asking where I was. Imagine my alarm and shock to think someone was keeping tabs on me. After a short conversation explaining my misfit as a valuable community member, the manager informed me that I would be fired. As I pulled out of the parking lot where I stopped to take the call, I was vaguely aware of a car behind me. Perhaps it was paranoia, but regardless, I drove straight home, packed up my most important things, grabbed my cat, and informed the landlord that I would be back for my things later on in the week. As I was packing up, my landlord told me that she was sorry to see me leave and that I should be careful because there were strange cars passing back-and-forth and stopping on our small (dead-end) street.

As I drove away, I received another phone call from the manager asking me where I was going. I informed the manager that I was leaving since I was no longer in their employ and my activities should not concern them. About a week later, I came back with my boyfriend to grab the rest of my things. I had made arrangements to retrieve my passport from a fellow musician (to avoid going inside the compound again). My friend was an earnest believer of Falun Gong and informed me that since my previous job was not a great fit, perhaps I would be interested in teaching instead. She told me that the organization had room in their schools with a higher salary, and then maybe eventually, I would want to start playing again. I could not even bring myself to consider the option.

While I was there, I met international musicians sponsored for a visa that worked for a mere fraction of what I made. Most of them lived in one-room dwellings that they rented from fellow Falun Gong practitioners. Many members donated their services, worked for free (simply for food and lodging), and many even allocated funds in their wills. As a result, Li Hongzhi’s residence is nothing short of luxurious and constantly expanding with new construction. He has amassed land in multiple locations, and this nonprofit that seeks to raise awareness of the Chinese government’s atrocities through art has become quite a lucrative venture.

Li Hongzhi refuses to acknowledge Falun Gong as a cult. “Falun Gong does not have temples, churches, baptism, all kinds of religious formalities,” he says. “People will go out to do the exercises every morning for half an hour or one hour and go back to work. That’s why I say it is not a cult.” Unfortunately, that is an incomplete truth. I witnessed meditation requirements multiple times daily, beautiful temples, seclusion from family/friends, and behavioral requirements with tremendous peer pressure to belong (and keep your job). In addition, widespread accusations of withheld medical care, endangerment, and death are linked to the Falun Gong practice. While Li Hongzhi denies such allegations, I witnessed his staff discouraging employees from obtaining (work-sponsored) medical insurance as evidence of a lack of faith in the healing powers of  Falun Gong.

Perhaps I have had an anti-authority streak since I was a child and am simply overly sensitive. On the other hand, my experience is hardly unique since many have plotted to leave for months/years. Falun Gong alarmingly finds its place on many international cult awareness sites. After all, many members praise “Master Li,” displaying his images on mini alters at home and the compound. So perhaps the Falun Gong compound is a cult or an institution that only serves the devoted. Or perhaps, I was simply unenlightened and lacked humility. As an arts patron, it’s up to you whom you will support. Judge for yourself.

Previous articleWhat Is an En Suite Bathroom and Is it Worth Getting One?
Next articleOpendoor Outperforms Earnings, Definitely Not Ajar
YOU MIGHT ALSO LIKE
Community

How To Sell Your Home Fast and Increase Its Value