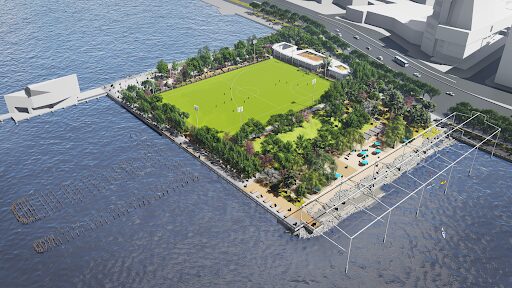 Maybe 13 is actually an unlucky number.

It’s certainly one possible explanation why 13th avenue in Manhattan no longer exists.

Jokes aside, anyone who has visited New York City knows that there are twelve avenues that run longitudinally across the island of Manhattan. But, few people realize that, for well over 150 years, there was a 13th avenue on the island.

Even in recent years, as the last remnants of this historical stretch of road were being turned into a state-of-the-art park (just a few yards from the greenway), it garnered little public attention.

The History of 13th avenue

13th avenue was created in 1837, as city planners envisioned it extending all the way up to 135th Street. However, that never came to be. At its longest, the finished avenue ran for 15 short blocks, starting at West 11th and ending at 25th.

The avenue was built with dirt, debris, and garbage excavated from other building sites in Manhattan which were then dumped into the Hudson River to form the road’s foundation.

Dumping of debris into the Hudson River was made possible because of a change in the law, allowing New York State to purchase plots of “land” under the river and use debris, dirt, and trash to expand the Island. As soon as the bill was passed, developers and investors began buying, selling, and exchanging these plots of land with grand goals of future developments, buildings, and infrastructure. In just a few years, 13th avenue ran for over ten blocks.

Soon, many businesses had sprung up along 13th avenue, including shipping yards, lumber stores, cheap apartments, and saloons. By all accounts, the men who worked in this part of town were far from civilized. Reporters at the Times were quick to cover 13th avenue development, documenting the “deeper mud holes” found on the avenue, and the “dreary waste” of poor immigrants and dockworkers who lived along the avenue.

With easy access to piers along the river, 13th avenue was a busy hub for business during the day, but at night it turned into a squalid sordid mess that law enforcement officials were fearful to enter. Saloons and bars in the area gained a reputation for their common brawls, dirty atmosphere, and occasional murders.

At the end of the century, 13th Avenue’s era of growth and prosperity ended just years after it started. The city realized that it needed to create piers large enough to house the latest invention in travel: steamships (think the Titanic and Lusitania). So officials decided to remove the landfill that was 13th avenue and begin constructing Chelsea Piers.

However, the city did not condemn one section of 13th avenue that was home to the West Washington Market, creating a small peninsula that jutted out into the river. The market slowly died out several decades later, and the peninsula became known as the Gansevoort Peninsula.

13th Avenue in the 20th century

For much of the 20th and 21st centuries, only a small sliver of 13th avenue remained. The peninsula was closed to the public, housing a variety of facilities for the sanitation market. During the Bloomberg era, there were plans to turn the small strip of land into Manhattan’s collection point for waste. The location was ideal, with easy barge access, but the plans never manifested. Instead, Gansevoort Peninsula slowly grew more dilapidated each year.

13th Avenue Rises From the Ashes

That all changed when the Hudson River Park Trust proposed turning the Gansevoort Peninsula into a park with a “rocky shoreline,” “play lawn,” and Manhattan’s first public beach. Construction has already begun on the $70 million 5.5-acre park, and New York City’s residents eagerly await its opening in 2023. Sadly, this means the destruction of the last remaining section of 13th avenue. 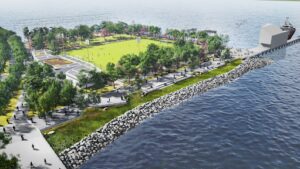 The park will include a sandy beach area, kayak access, a salt marsh for wildlife, a dog run, lounge chairs, and picnic tables. The park’s easy access to the greenway, Chelsea Piers, Pier 40, and the vibrant neighborhoods of Manhattan make it the perfect spot for meeting friends, playing sports on the field, or just enjoying time outdoors. 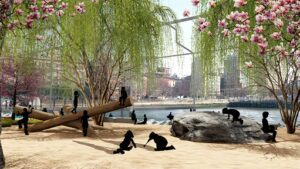 The Whitney Museum of American Art is constructing a sculpture by David Hammons, one of the country’s largest public art projects!

So if you are looking for housing in and around Chelsea, don’t forget that New York City will open one of its most exciting parks to date in the space of a few two short years.

Real estate prices near Gansevoort Peninsula are already on the rise, so don’t wait too long to bet on the future of this exciting city.

Previous articleBuy the Dip Sputters Out, Debt Ceiling Game of Chicken?
Next articleRealtor Commissions Under Threat by Justice Department Probe and Civil Lawsuits
YOU MIGHT ALSO LIKE
Beyond The Building