News at the Rockefeller Center 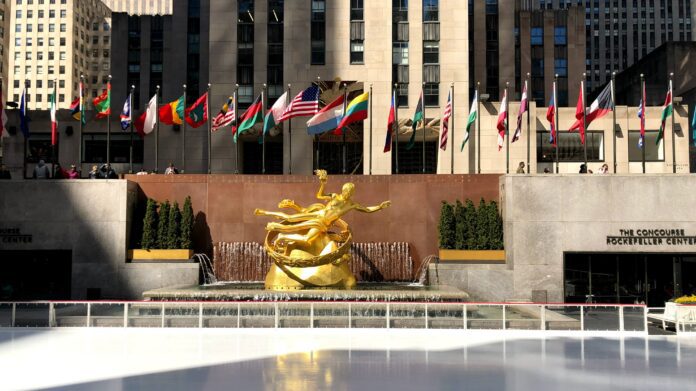 The Rockefeller Center in Midtown Manhattan is one of the most incredible places to see in New York City. Home to many attractions including Top of the Rock Observation Deck 70 floors up, the iconic Radio City Music Hall, the famous Rainbow Room on the 65th floor with the epitome of elegance, the finest dining and breathtaking views, and The Rink, where you can ice skate to your heart’s content at one of the most famous ice skating rinks in the world.

The Beginning of Rockefeller Center

The building is now a U.S. National Historic Landmark and was originally built from 1931-1939, with the first buildings opening in 1933. John D. Rockefeller, Junior had leased the space for 87 years at $3 million dollars annually, at that time. He is responsible for developing and managing the Rockefeller Center from then until the end of the year 2000, when the family severed its ties completely.

Rockefeller Center encompasses 22 acres and 19 commercial buildings. It is located from 48th Street to 51st Street in Midtown Manhattan. The famous Rockefeller family commissioned the original 14 Art Deco buildings that span from Fifth Avenue to Sixth Avenue, split by a large sunken square and private street of their own; Rockefeller Plaza. 75 Rockefeller Plaza was added by the Rockefellers later, as the new home to the Standard Oil Company (Esso) and was completed in 1947. There were four International buildings added as well, located on the west side of Sixth Avenue.

The Rainbow Room is “the” place to go if you’re planning an epic celebration, you can book time there. Presidents, dignitaries and celebrities have all graced its presence. It is lavish and elegant, perfect for large weddings with its ballroom atmosphere and unforgettable, spectacular views. It’s also a fine dining restaurant, and houses the equally notorious cocktail lounge, Bar SixtyFive, open Saturdays from 4pm-1am, Sundays and Mondays from 4pm-10pm, and every other day from 5pm-11pm.

The Rink Is Open!

The Rink at Rockefeller Center is located right in the middle of the Center, where you can ice skate in this world famous rink with the iconic golden statue of Prometheus in the background, along with the Rockefeller Center Christmas Tree in mid-November. This year, it was recently announced that the Rink will open on November 6th, 2021. This long awaited season for ice skating is finally here, and remains an affordable form of outdoor entertainment with tickets for adults just $25 (except certain times when they run $35 at most) and $10 for kids 5 and under. You can even rent ice skates for just $13, or bring your own. So come on over to the Rockefeller Center and experience this powerful odyssey!

The Rockefeller Center is also famous for the annual lighting of the Rockefeller Center Christmas Tree, typically a Norway Spruce some 70-100 feet tall. The lighting event has maintained this tradition from the beginning, started by construction workers on the Center, back in 1931. Since 1997, the tree lighting ceremony has been broadcast live on NBC’s home turf on the Wednesday after Thanksgiving. Hope to see you there!