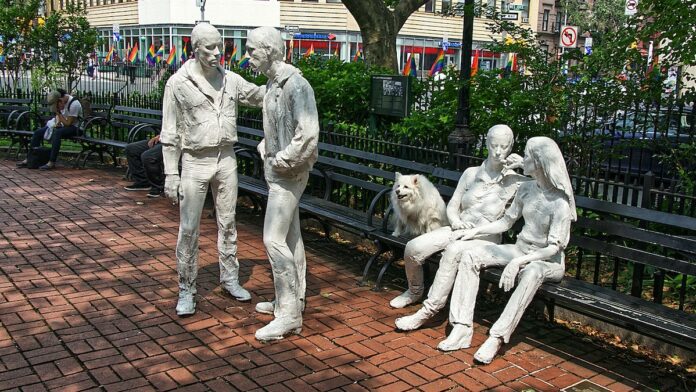 What was once a haven for artists and activists in the 60’s is now one of the most coveted places to live in. Home to Washington Square Park, jazz clubs and off-broadway theaters, Greenwich Village exudes the best of New York’s history at every corner.

The neighborhood served as the epicenter of the Counterculture Movement in the 60’s, providing refuge to anyone labeled an outcast or rebel. Some of the most prominent social groups having organized in the Village were those of the LGBTQ+ community. Members of multiple promenade organizations often met at one of the many landmarks scattered throughout the neighborhood.

Throughout the 50’s, 60’s and 70’s, musical icons such as Bob Dylan, James Taylor, and Jimi Hendricks gained popularity in the Village. Some of them even resided in the neighborhood, as well. In the 20’s, Cherry Lane Theater opened on Commerce Street. Cherry Lane is currently New York’s oldest off-broadway theater that’s still running. This is where many non-conventional playwrights were first presented to the public.

The farther back you go in time, the deeper its revolutionary roots. In the early to mid-20th century, Greenwich Village was the heart of the American Bohemian Movement. Penniless artists and free thinkers congregated in the village to escape the pressures of industrialization.

Even the neighborhood’s layout is rebellious. Most Manhattan neighborhoods are organized like a grid, but Greenwich Village one of the exceptions. Its streets are unruly and its boundaries are not clearly defined, although most residents agree that Greenwich Village encompasses NYU and the West Village. It’s bordered by Broadway on the East, 14th Street on the North and Houston Street on the South.

A lot of Greenwich Village’s historic culture is preserved through its buildings. Since development is tightly restricted, many of its structures are protected and will remain intact. One of its most notable properties is the 10th Street Studio building, which was the first of its kind built specifically for resident artists. Future buildings resembled 10th Street Studio’s design and contributed to the growth of the art scene in the historic neighborhood.

Famous artists and writers such as Winslow Homer, Mark Twain, and Salvador Dali used 10th Street Studio as a meeting place. The memorable building is regarded as the birthplace of early progressive ideals.

Today, a quick walk through Greenwich Village will reveal its busy cafes, fancy restaurants and pricey real estate. Although the price of housing in the Village varies significantly, the median price for a home is about $2.2 million. The average price per square foot is $2,132. For someone looking to rent, a studio costs $2700/month.