Remembrance and Reconstruction: The Financial District After 9/11 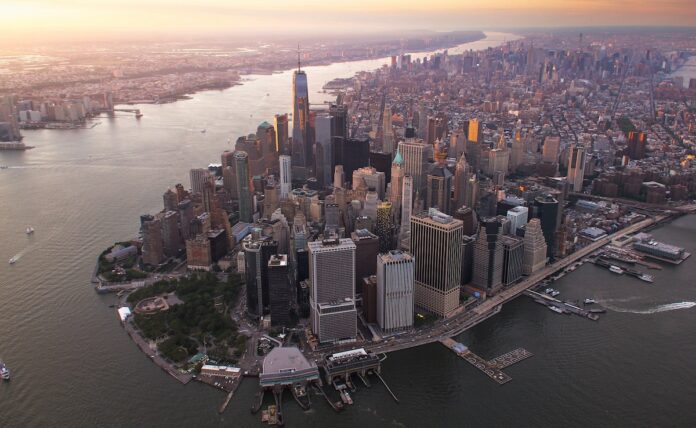 This year marks the 20th anniversary of 9/11, and New York will once again mourn the losses we’ve suffered while celebrating the hope and resilience we found in the aftermath. New York has several annual events that will be taking place again, but each will hold more weight this year as we reflect on the two decades that have passed since the attacks.

The Tribute in Lights, an art installation that features two bright blue beams of light where the Twin Towers once stood, will be expanded this year to include the facades of many landmarks. Buildings such as the Empire State Building and Lincoln Center will shine that same shade of blue in solidarity with the World Trade Center. For 20 years these traditions have reshaped the Financial District into a neighborhood focused on reflection, community, and rebuilding.

Before 2001, FiDi was not a neighborhood in the traditional sense. Most buildings in the area were devout office spaces that were slowly being abandoned due to several stock market scares. Additionally, the rise of the internet had begun to slash the need for commercial office space. This led to a real estate crisis that cast FiDi in an unappealing light. While there were plenty of people around during the workday, the neighborhood was a ghost town on nights and weekends. With few permanent residents living there and office spaces growing increasingly empty, the city started making plans to convert many buildings from commercial to residential spaces.

All those plans came to a screeching halt on September 11th, 2001. The tragedy at  Ground Zero forever changed the landscape of the city. It took 100 days to put out all the fires at the World Trade Center site. While they were still raging, the damage could be seen from space. When the fires were finally extinguished, the full scope of the damage was immense.  Along with the Twin Towers, World Trade Center buildings 3 through 7 and the St. Nicolas  Greek Orthodox Church were also destroyed. Several other surrounding buildings, such as The  Deutsche Bank Building, were marked as condemned due to structural issues and toxic conditions inside them. 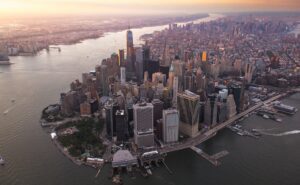 In the wake of rampant destruction and a massive loss of life, the city had to decide how to handle the site. It took nearly a year to clear the remains of the attacks. In that time, it was decided that the site would house a memorial at Ground Zero and that the World Trade Center would be rebuilt. Designs for what is now the Freedom Tower were unveiled in December of 2003, and construction soon commenced.

However, it was a slow process, to say the least. The site looked largely the same for five or six years due to lawsuits, a recession, and design changes. But once things picked up, the memorial waterfalls started taking shape in 2009 and the Freedom Tower slowly began to rise.  By the 10-year anniversary of the attacks, the memorial fountains, with the names of the victims of the attacks, were completed. By 2014, the 1,776-foot Freedom Tower was completed, the same year as the opening of the museum. By 2018, the entire World Trade Center hub and memorial were complete.

In the midst of these projects, the rest of FiDi was being overhauled as well. Plans to make the area more residential were being renewed. If the World Trade Center was being built with a memorial, park, and museum, then the surrounding neighborhood should grow to reflect that change. FiDi, while still being the financial center of the city, the country, and the world,  could also become a savvy neighborhood where someone could raise a family.

Since 9/11, over 60,000 people have moved to FiDi. Many office buildings, such as 20 Pine Street, have transformed into residential complexes with over 4,000 units currently under construction.  However, it was not enough to simply transform offices into homes. The neighborhood itself needed to rebrand. The new businesses moving to the area were focusing largely on art and tech, attracting a new crowd of people who subsequently moved to the area. In 2018,  Downtown Alliance President Jessica Lappin commented, “As more and more companies are moving downtown, people like to walk to work, particularly young professionals and millennials…And contrary to popular belief, we have a lot of open space.”

Today, FiDi is considered a lively, vibrant neighborhood. Expensive, to be sure, but it has a friendly, bustling atmosphere, many bars and restaurants to enjoy, several grocery and department stores, and a growing art scene. The community FiDi needed in the 90s has finally emerged. It is thriving and only continues to grow. Yet, still looming over the city is One World  Trade Center. It forever reminds citizens of the neighborhood that this transformation came from great struggle and grief.

The 9/11 memorial reminds us to never forget the terrible events of that day 20 years ago. It was a time of struggle and fear, but also a time of resilience and community. Rising from the ashes of that tragedy came new ways of thinking about what’s important to us and to our communities. As the 9/11 Memorial Website says, “Today, the 9/11 Memorial & Museum  stands as a beacon of healing and renewal – a physical embodiment of the compassion we  showed to one another, the resolve we demonstrated to the world, and how, in the face of  unfathomable loss, we rose as one.”

A shining example of this renewal is the very neighborhood where the attacks took place. For a long time, FiDi was not a place to build a home, but a location to exchange money and get rich. That attitude has not exactly gone away, but FiDi has gained a sense of community and pride as it continues to grow. This sense of community is infectious in a city like New York.  It is a shared unity; an identity that no person or event can ever take away. A community is only as strong as the people who live there and the compassion they have for their fellow human beings. Now, thanks to the memorial and rebuilding efforts, the burgeoning FiDi community shares in the pride that makes New York strong.

Previous articleTop 10 Places for Contemporary Art in NYC
Next article2 World Trade Center: Last Piece to Get Underway on the 20th Anniversary of 9/11
YOU MIGHT ALSO LIKE
Beyond The Building