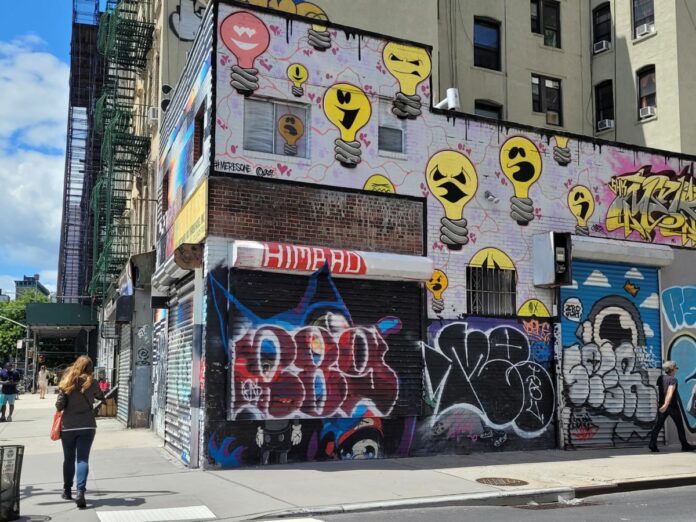 Maxwell Runko is a lifelong performance artist and trained sculptor based in Brooklyn, working out of Manhattan. 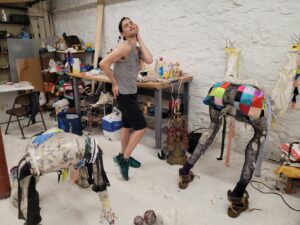 With such a buoyant personality and brilliant work based in the morphing of reality’s greatest problems into teachable and learnable moments, it’s only fitting to speak to this successful queer artist about his prism of perspective on the industry, and how New York City – a mecca for the creative with a hyperdrive – informs the work of every artist it draws in.

He takes me around Chinatown to show me the gallery he hubs from, as well as shedding a new light on opportunities in commercial geography and why now more than ever community is key.

So, to start, can you kind of guide us through the work?

The jumping-off point for this came from me doing a lot of live performance work and getting to a point where my urgencies in my lived body as a white man weren’t aligning with what really needs to be talked about, which is the queer body and the experience of the identity being separate from the body itself, using it as a vehicle. So, these forms here, these bodies – which I’ve been calling “surrogates” – are the vessels for that. A lot of my work deals with power dynamics and how they’re prescribed based on the person, so these bodies evoke that with their poses. They’re outwardly submissive but have an allure that gives them dominance. The clothes are representative of the Jester, who can make fun of everyone and everything, but thinking to myself, ‘What’s the Jester of 2021?’ I kept coming back to the queer person. I know for me, in my family, I’m the one who injects the humor in the room and as queer people we’re kind of tormented in this way… Told by society we’re not enough, what we identify as is wrong, but then all our identifying interests are co-opted by the “dominant” group. 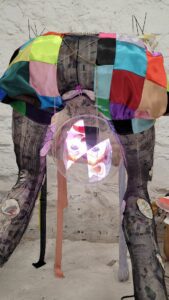 It’s a good point. You notice on television the identity of the token gay friend being put on the scene is always either comical or ruthlessly petty, a stereotype of sass.

Exactly, a few traits of just a stereotype have been taken and diluted queerness to that character. It’s the only way we’re accepted. And that’s a problem that’s not just within the LGBTQIA+ community, but in terms of gender and race too this is a prominent issue in our heteronormative society. 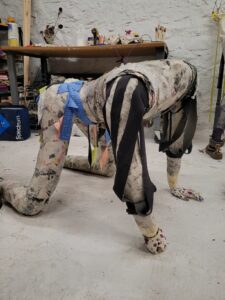 How long have you been working out of this studio in Bushwick, and did this project start here?

I’ve been in this studio for almost two years, and yes! This work started right around when the 2020 lockdown happened. I was just coming between my apartment and my studio, and that’s it! It was interesting because during that time of course you couldn’t see anybody, but when I came here it was kind of like, you know, my three friends are here! I share the space with another artist which is common, but they are never here, so it was just me and the figures for the whole quarantine. Even in a dark time, having this space was so invaluable to make these things that have been brewing for so long. Artists aren’t really afforded that space in day-to-day life!“…My work is risky and not necessarily built with the sole purpose of being sold. Being given the opportunity to be part of a gallery that leans into that, if I didn’t accept then I knew I’d be kicking myself.”(The future location for the gallery in Chinatown)

You have recently switched work environments, from one gallery to another in Chinatown. What made that change in a time where the job market for artists is wobbly a solid move?

When I moved to New York four years ago I was freelance art handling at New Museum and MoMA, as well as a few other galleries. I had all this work lined up into Covid, and then people steadily started canceling – for the foreseeable future there was nothing for me. Then in August 2020 a friend from the New Museum got laid off and reached out from a new gallery in Tribeca, 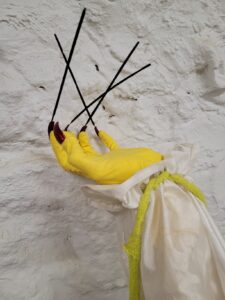 as head prep. They brought me on, and honestly, I just kept showing up every week. I was there for about a year, and in that time, I was brought all the way to full time, taking my manager’s position when they left. Now the gallery I’m moving to is currently in Chinatown on the fourth floor. While it’s a small space, it’s perfect for what they needed. But! In September they’re moving to a whole three-story space down the street to expand and asked me to be their head handler which was a complete dream. 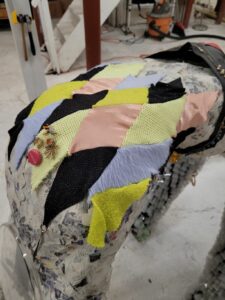 What resonates with me more from this team is that this gallery is owned and run by a lesbian couple and hosts mainly queer and POC exhibits. They are far more experimental, and more interested in ‘creating the fantasy rather than just selling the painting,’ so they take risks… it’s a full experience and that’s so exciting to be a part of because that’s the way my own art is… my work is risky and not necessarily built with the sole purpose of being sold. Being given the opportunity to be a part of a gallery that leans into that, if I didn’t accept then I knew I’d be kicking myself. (The current location, WITH THEIR CURRENT Exhibition, called “Dog!”)“…Out of this whole year, there’s been a positive shift in artist support for one another where galleries will reach out to each other and connect. That’s been powerful as a silver lining for creators in the city.”

There’s been such a mass exodus of people in the city. How has that affected artists and gallery spaces in the city from your perspective?

Well, it’s interesting. With all these commercial spaces up now, a lot of people are moving from Chelsea to Tribeca with their galleries, and a lot are moving from Brooklyn to Chinatown. I’ve been seeing that happen a lot. The shift from Brooklyn is a big statement because it’s forced by legibility. There’s this whole elitist art nonsense in the community where people will write each other off, ‘Oh these are just Brooklyn artists,’ because they only show in Brooklyn at X, Y and Z places. They are both good! But to be clear, in Brooklyn you have more space and the ability to get away with whatever you want so that’s its plus. In Manhattan, in exchange for visibility you’re giving up that flexibility, but you’ll be legible. The opportunity for a gallery out here is great now though because there’s so much space. And out of this whole year there’s been a positive shift in artist support for one another where galleries will reach out to each other and connect. That’s been powerful as a silver lining for creators in the city. 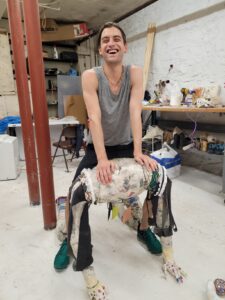 Enjoyed this interview?  Read many more CitySignal QAs by our content team, as well as other interesting stories by Caroline Zemp.