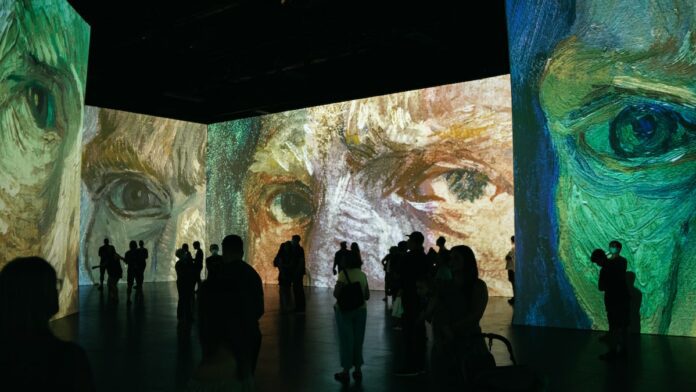 Art museums have seen a significant drop in attendance, revenue, and programming during the past 18 months. Many major performances have been rescheduled and some art institutions have gotten closer to shutting down than we realize.

As fall brings cooler weather inspiring us to go out and have fun, it’s time to immerse ourselves in the human made beauty that New York City has to offer.

The following is a fantastic selection of art events in the city that you shouldn’t miss.

Van Gogh: The Immersive Experienceis an hour-long art projection event created and operated by the same company that hosted Atelier des Lumières in Paris. The Potato Eaters (1885), Sunflowers (1888), Starry Night (1889), and The Bedroom (1888) are among the paintings on display (1889).

Two-story projections of the artist’s most captivating works are included in this 20,000 square foot light and sound extravaganza. Luca Longobardi, an Italian multimedia composer, produced original music for the large-scale computer animations of the painter’s work. In a 360-degree show of epic proportions, see the work of one of history’s greatest painters.

The exhibit will be held at Pier 36 NYC. This location is a massive 75,00 sq. ft. waterfront area at Manhattan’s Lower East Side that offers awe-inspiring views of the Williamsburg and Manhattan Bridges, as well as the East River.

Van Gogh: The Immersive Experience collaborates with David Korins, a Tony-nominated and Emmy Award-winning designer recognized for his numerous Broadway set designs. Korins’ role as the exhibit’s creative director will channel his boundless creativity into spectacular interior designs, experimental techniques, and state-of-the-art installations into the venue for an outstanding display.

Jen Stark, the highly talented multimedia artist, introduced her immersive exhibition on 17 September. The display is supposed to run through to 24 October in Williamsburg, and visitors can expect Cascade to awe them with its powerful dreamworld visuals. The show involves dizzying projections, sculptures, murals and 3D-mapped environments.

To breathe life into her sacred geometries and hypnotic visions, Stark worked with a team of expert computer programmers skilled in projection mapping and augmented reality. As visitors pass through the exhibition’s waterfall room and portal gallery, they will become immersed in a psychedelic trance infused with throbbing, dynamic patterns that belie the artist’s unique drips and alien forms and figures.

Jasper Johns’s groundbreaking work sent seismic waves through the art community when it was first displayed in the late 50s, and he has continued to challenge new audiences—and himself—over a career spanning more than sixty-five years.

Jasper John first exhibited his revolutionary masterpiece in the late 50s. This show sent shockwaves through the art landscape at the time, and up till today, it never fails to challenge the hearts and minds of audiences.

John was born in Augusta, Georgia, in 1930, but he spent most of his life in New York. Today he resides in Sharon, Connecticut, still actively working in his studio at 91 years. He is known for his use of mundane objects, motifs, formats, and language, which disrupted the traditional conceptions of what constitutes an artwork. His artistic practice played a role in the birth of movements like Minimalism, Pop art and much more.

Mind/Mirror is the most comprehensive exhibition of John’s work to date. It features his iconic works and many never-before-see pieces, including paintings, sculptures, prints, and drawings spanning from 1954 to this day. The exhibition will be held across two venues intended to represent two parts of a whole.

The two venues for Mind/Mirror are the Philadelphia Museum of Art and the Whitney in New York. This uncommon two-way presentation echoes the artist’s longtime intrigue with mirroring as each side of the exhibition reflects the other. Enjoyed together, they envelop audiences with the numerous mysteries, phases, and emotional states of a long and fulfilling career.

Before Yesterday We Could Fly: An Afrofuturist Period Room

Before Yesterday We Could Fly: An Afrofuturist Period Room opens on November 5th, 2021, at The Met Fifth Avenue. Like other installations of The Met’s period rooms, it is a fictitious home setting made up of furnishings and artifacts. Instead of affirming a single point in time, this structure reinterprets the period room’s interactive experience by recognizing the African and African diasporic notion that the past, present, and future are all intertwined.

Seneca Village, a thriving town built primarily by free Black tenants and proprietors that prospered from the 1820s through the 1850s, inspired the exhibition’s storyline.

Seneca Village was demolished in 1857 by the City of New York, which used prerogative powers to seize property for the building of Central Park and another very different type of neighborhood. Before Yesterday We Could Fly is inspired by Virginia Hamilton’s famous retellings of the Flying African story, which praises enslaved peoples’ creativity, innovative applications of flying, and the importance of mysticism and spirituality to Black communities in the face of enormous uncertainties.

Recognizing this injustice, the show poses the question: What if this settlement was given a chance to grow and flourish?