A Guide to Buffalo, New York 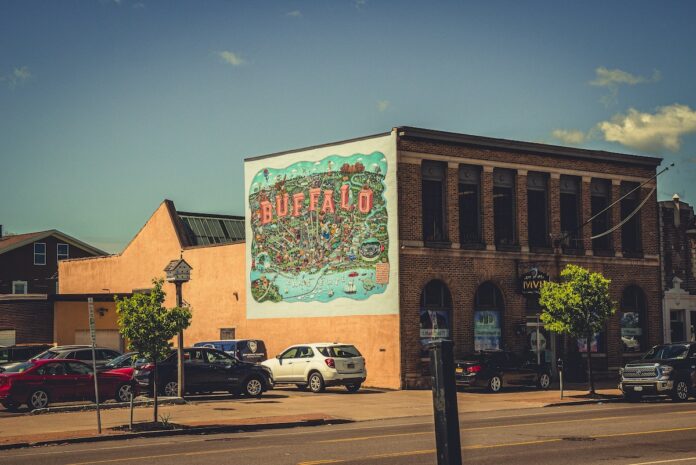 The city of Buffalo is the seat of Erie County and the second-largest city in New York, with a population of 278,349 in 2020.

The History of Buffalo

In the War of 1812, British Forces burned Buffalo and the northwest village of Black Rock in 1813, but both were rebuilt by 1815. Buffalo was named after Buffalo Creek, and incorporated into New York in 1832 after it improved its harbor to the point that it was chosen as the terminus for the Erie Canal in 1825. The canal was critical to its growth, as it was the primary inland port between the Atlantic Ocean and the Great Lakes. Then the railroads overtook the importance of the canals, and Buffalo became the second-largest railroad hub after Chicago. Once that industry waned, manufacturing took over, with steel production in the mid-19th century.

The Guaranty Building was one of the first steel-supported buildings in the world, as well as one of the first skyscrapers. In 1886, Buffalo became the first city with electric street lights. The Statler Hotel Buffalo was the first hotel to offer a private bath in each room in the early 1920s. But soon deindustrialization, the Great Depression, and the St. Lawrence Seaway opening in 1959, put the economy in serious jeopardy. But the thriving city of Buffalo could not be kept down. Instead, they developed their service industries, keeping some manufacturing as well. In addition to even more colorful history, President William McKinley was assassinated in Buffalo, while new President Theodore Roosevelt was sworn in.

Today, the Buffalo-Niagara Falls Metropolitan Statistical Area (MSA) has over a $53 billion dollar GDP (gross domestic product) value. In addition, Buffalo ranks in the top 10 of all U.S. cities in International trade. In 2005, Buffalo was ranked 3rd cleanest large city in the country. It is known as the biggest flour-milling city in the world. Buffalo is home to the Herschell Carrousel Factory Museum, the only surviving historical carousel manufacturer in the world that’s still open to the public, and houses one of the only known surviving wooden carousels in the world. While there are many things Buffalo is famous for, debatably one of the most notable is their Buffalo wings, of course!

The city is home to the oldest urban parks system in the United States and has many notable cultural attractions like the Albright-Knox Art Gallery and Shea’s Performing Arts Center. The Buffalo Museum of Science, as well as many other museums, cultural events, and festivals, call Buffalo home. The Buffalo Philharmonic Orchestra and the Buffalo Philharmonic Chorus are world-renowned, and as recently as 2021 won their latest Grammy Award. Kleinhans Music Hall, where the Orchestra and Philharmonic Chorus often play, is said to be one of the nation’s acoustically perfect halls. Additionally, Buffalo has over 50 private and public art galleries and CNN’s American Style Series ranked Buffalo 4th on their list of American Top Art Destinations. Seriously, folks, we could go on and on.

Things to Do in Buffalo

Overall, Buffalo, NY is arguably one of the best places to live in the entire state and boasts a lively nightlife scene where the last call isn’t until 4 am, as opposed to the 2 am standard in most cities. There are so many things to do in this culture-rich city that it’s hard to know what to include. Let’s start with the old standby: Niagara Falls. Buffalo is known as the City of Light (just one of its many nicknames) due to the hydropower of the Falls. Niagara Falls, of course, is spectacularly breathtaking. Take a boat excursion for added excitement and wonder, as this stunning world-famous site lives up to all your expectations, and more. If you only have time for one sightseeing trip in Buffalo, it’s Niagara Falls, hands down.

Next, we have Frank Lloyd Wright’s Darwin D. Martin House, topping all the lists, as well. Incidentally, Buffalo has the 2nd most Frank Lloyd Wright homes in the U.S., with a total of 5. Cultural pride at its best, at this National Historic Landmark. Then there’s the Buffalo and Erie County Botanical Gardens, for one of the most beautiful natural displays in an urban environment. The same man who created Central Park, Frederick Law Olmstead, created the Buffalo and Erie County Botanical Gardens, one of the nicest sites – and sights – to behold, in Buffalo. And of course, we have to mention Elmwood Village, one of the 10 best neighborhoods in the country. Here are a couple of pictures to sum it all up.

This is just one of the charming homes that line the streets in Elmwood Village. And artistic murals cover the buildings in the downtown area, like the next picture shows.

While there, peruse the quaint and picturesque shops and take a Buffalo Food Tour to get a taste of some of the best food in town! After all, it’s also considered one of the best food cities in the country. This city has so much to offer it’s insane, and the local residents have pride like no other.

So let’s talk real estate, especially since the Buffalo – Niagara Falls Metropolitan area has the most affordable housing market in the country. One of their most famous nicknames is the City of Good Neighbors. Here’s a couple of selections from our preferred real estate listing platform, RealtyHop.

This is a wonderful 1472 ft² 3 bedroom converted into a 5 bedroom, 1.5 bathroom house. Central A/C and new hot water tank with like-new 4-year-old furnace, new fence around porch and property which is a double-sized lot. People seeking a newer roof, maintenance-free vinyl siding, and a balcony recently serviced, must see this treasure.

This adorable Cape Cod has 4 bedrooms, 1 bathroom, and 1,710 ft². This unit has a newer furnace and hot water tank, as well as an updated eat-in kitchen with a walk-in pantry. The first-floor bathroom was also updated in 2019 and there is a fenced-in backyard as well as a 2 car garage. Really, people, can it be any more perfect than this?

There is not much not to love about this nostalgic feeling city in all its glory. Come see Buffalo, New York for yourself. You’ll be glad you did!

Previous article5 Awkward Apartment Concepts in NYC That Never Fail to Rent
Next articleWhat Is A Loft Apartment and Why Do I Need One?
YOU MIGHT ALSO LIKE
Community