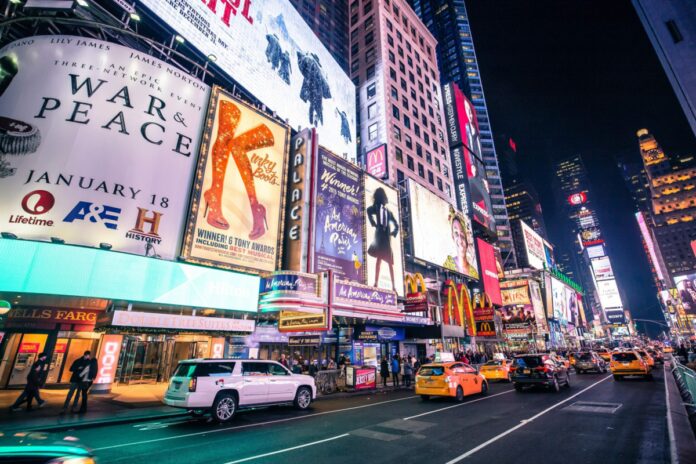 If you happen to be in New York City’s Times Square, there’s a good chance you won’t be able to resist being dazzled by the top-notch stage productions—many of which are presented in iconic, historic theaters. And while the shows might be the main attraction, it’s the breathtaking architectural details and intriguing histories of these theaters that are just as astounding.

From a hidden apartment behind the scenes to an intricate Tiffany glass panel ceiling, there are so many exciting features for your to discover on your next trip to a Broadway show.

So let’s rewind and take a closer eye-opening look at three of Times Square’s most stunning theaters that have withstood the test of time and uncover some of the secrets and stories that have made them the real longest-running hits on Broadway.

Broadway’s oldest continually operating theater, the Lyceum, was built in 1903 by producer/manager Daniel Frohman. Designed by architects Herts & Tallant in the Beaux-Arts style, the theater features an elaborate gray limestone façade, ornate Corinthian columns, and spectacular marble grand staircases that lead up to the mezzanine from the foyer.

When the Lyceum theater opened its doors over 100 years ago, it had a state-of-the-art ventilation system that kept the space warm in winter and cool in the summer. But that’s not all. Frohman also built an office, extensive scenery shop, and an apartment that had a small peeping door with a bird’s eye view of the stage—all above the theater. Rumor has it that when Frohman’s wife, Margaret Illington, was on stage, he would wave a white handkerchief to let her know she was over acting. Today, Frohman’s small apartment is the Shubert Archive, filled with many more historic treasures for you to explore.

The Lyceum was purchased by a conglomerate of producers in 1940 and later changed hands in 1950 when renowned theater owners, the Shuberts, took ownership. The theater has been owned by them ever since.

Apart from being one of the oldest operating theaters in Manhattan, the Lyceum was also the first theater to achieve landmark status in 1974. Additionally, it’s also one of the smallest theaters on Broadway with only three levels and a seating capacity of 950. Notable productions that ran here include the Broadway debut of The Good Country Girl (1950), Whoopi Golderberg (1984), and Be More Chill (2019).

Among the oldest theaters on Broadway, the Hudson was built between 1902-1904 by Henry B. Harris, who was one of the top Broadway producers at the time. The theater opened its doors in 1903, with Cousin Kate starring Ethel Barrymore.

Once you’re inside the theater’s 100-foot long lobby, you’ll notice a backlit stained glass ceiling manufactured by Tiffany. The theater also has impressive safety features with 28 exits, and is completely fireproofed and outfitted with a sprinkler system. In 1987, The Hudson was granted landmark status for both its internal and external features.

Many stars have graced its stage including Douglas Fairbanks, Helen Hayes, and Edward G. Robinson, among others. Judith Anderson and Barbara Stanwyck also made their debuts here. And even The Tonight Show’s first nationwide broadcast starring Steve Allen originated from The Hudson in 1956.

Built in 1903 by producers A.L. Erlanger and Marcus Klaw and designed by architects Hertz & Tallent, the New Amsterdam Theater was one of the largest Broadway theaters at the time with 1,702 seats. Shakespeare’s A Midsummer Night’s Dream was the opening performance at this theater, specially selected by Erlanger and Klaw to evoke the ethereal magic of this beautiful Beaux-Arts-style theater that boasts a magnificent interior of carved stone, painted plaster, fine wood, tiles, and murals.

From 1913 to 1927, New Amsterdam gained popularity as it was home to Florenz Ziegfield’s Follies—a show that was a mix of Broadway and high-class vaudeville acts. The building also had a Roof Garden for more risqué shows which no longer exists.

Like many of its contemporaries, the New Amsterdam Theater was hit hard by the Great Depression and was converted into a movie house in 1937—gradually descending into disuse and decay. The venue was bought by the Shubert Organization in 1982 and then by the State and City of New York in 1992, after which it was finally restored to its art nouveau glory by the Walt Disney Company.

In 1979, the theater earned its landmark designation and was added to the National Register of Historical Places in 1980. It finally reopened as a Broadway theater in 1997, staging popular musicals such as Mary Poppins, Aladdin, and the multi Tony Award-winning The Lion King.

Whether you’re in the neighborhood for some amazing broadway shows or are a local resident of the Theater District, find some time and stop by these three amazing theaters!