What’s In A French MRE?

Soon after our team members consumed and reviewed a Russian MRE, our office grew hyper-fixated on taste-testing a more reputable meal. The tales of congealed meat products and ill-tasting pate left some weary of future MRE samplings, but we scoured the internet, looking for a highly rated product. After careful consideration, the group decided to buy a French MRE. While not known for their strengths in combat, they appear to prepare delicious rations for their troops.

What is an MRE?

For those who have not yet entertained themselves with our team’s Russian MRE experience,

an MRE stands for Meal, Ready to Eat, and it is the complete meal or day’s worth of rations, typically for the military. It’s essentially shelf-stable food that can handle harsh weather and dangerous conditions so that soldiers in the field can receive adequate nutrition.

Different countries produce their own MREs, and while office workers in a New York City building have many options to choose from when deciding on lunch, our team finds great joy in sampling military rations from around the world. Think of it as a less sophisticated food tour.

Where do you buy a French MRE?

It’s not surprising that one of the world’s largest online marketplaces carries French MREs. We referred to Amazon to choose one of the fourteen French MRE meals. The decision was difficult, but we ultimately placed an order for menu option nine, which offered two main dishes: sausage and duck confit and pineapple rice with pork.

After purchasing the item online, it took around a month to arrive at our New York City office because good food takes time. We waited until enough eager team members showed up to dig into the rations. However, we could have kept waiting until the meal expires in 2024. The meal comes neatly packaged in a small box, small enough to possibly carry for a prolonged time.

What’s in a French MRE?

The French MRE menu consists of enough food to theoretically last a fighting soldier all day long. Providing 3,600 calories across three meals and several snacks and desserts, our box included:

Our team sampled every item in the box except for the black tea and water purifying tablets.

Four team members sampled various parts of the menu, the following are their opinions.

The beverages came in a plastic bag containing two packets of instant arabica coffee, a black tea, a green tea, and a package of hot chocolate. Outside this bag, the box also included an isotonic powder drink with a mango flavor. The coffee tasted like coffee, but the green tea was a hit. The hot chocolate tasted weak, comparable to a store-brand instant powder mix.

The mango powder did not initially mix well into the water and took a minute or two to stir thoroughly. We did not pour the entire packet into the glass, but the drink was incredibly sweet and artificial-tasting enough to warrant it as a good sports drink.

If none of these drinks suit your fancy, you can always rely on the daily supply of water-purifying tablets to keep you hydrated.

While many of the beverages fit into a breakfast menu, there is one explicit breakfast item in the box, muesli. At the time, we instinctively prepared this dish with hot water and mixed it into a warm paste, but after further research, we learned consumers should prepare this meal cold. We did not add any other components to the dish, such as juice or yogurt.

This muesli consisted of oats and generously sized bits of chocolate. When we mixed it with hot water, it resembled a more liquid-based oatmeal dish, where the water took on a hot chocolate-like taste. The combination of oats and chocolate was not overly sweet and quite delicious for a breakfast item. 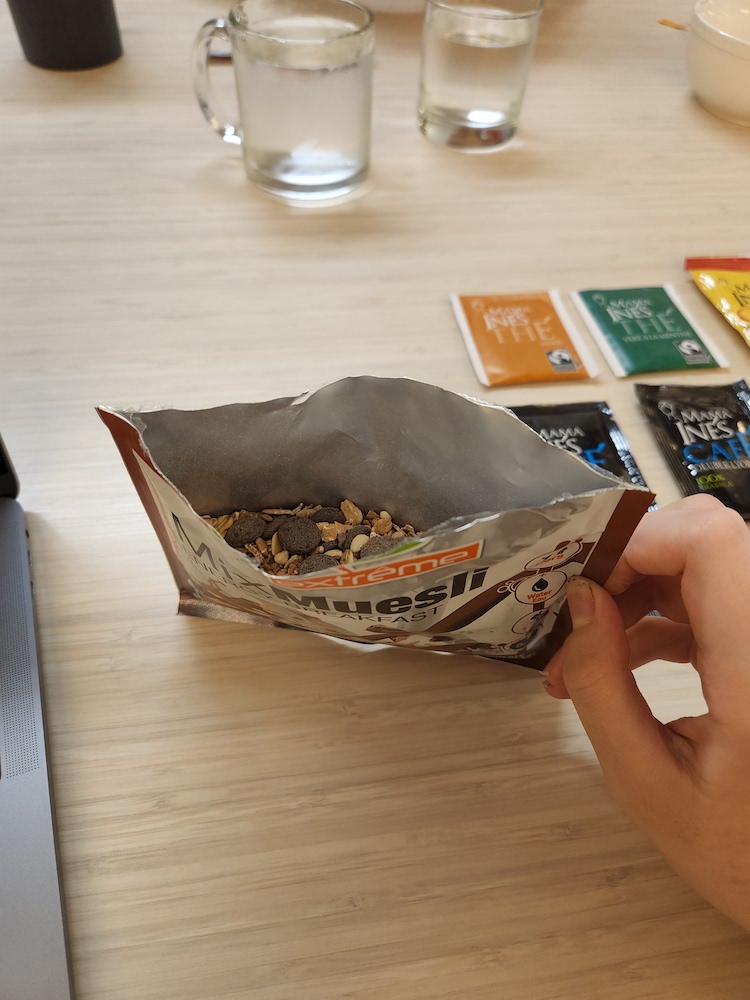 For this review, we’ll classify the starters as Thai soup, deer pate, and blue cheese. The Thai soup came in a powder with pasta in the shape of O’s that we stirred into boiling water, slowly adding more water to the mixture. Looking back, we might have added too much water, as the soup did not have a robust taste. The flavor did not stand out, but it was good enough to have a couple of spoonfuls.

Blue cheese came in a can and possessed a gelatin-like consistency. Paired with the biscuits, this made for a pleasant appetizer and did not have an offensive blue cheese taste. Those who adore the funk of blue cheese may not find that this satisfies their taste buds, but our team members appreciate the laid-back nature and consider it a viable cheese option.

The deer pate was a big success, with multiple members returning for several bites, either with a biscuit or a spoonful. While it possessed an initial metallic taste, it quickly faded into a delicious appetizer.

French MRE menu option nine came with two entrees. The team peeled the container of pineapple rice with pork open and decided to cook it in the microwave (yes, we learned from the failure of our Russian MRE taste-testing!) for several minutes. After cooking, the rice appeared yellow, like turmeric rice, and did not have a powerful smell. Well-received by the tasters, one team member claimed it had “legit good pork” that appeared slow-cooked. Several team members ate this option throughout the remainder of the tasting, getting close to finishing the plate.

While the first entree cooked away in the microwave, the remaining team members decided to tap into the authentic experience of eating an MRE, and utilized the heating kit. All efforts to maintain fire safety during the Russian MRE no longer apply. One team member excitedly assembled the small fire holding container, dropped in one of the cotton pellets, and struck a match. The first attempt to set fire did not succeed, but a second and more diligent approach caught fire, and the team members quickly opened the container of sausage and duck confit and put it on the fire.

Within a minute, the fire started to grow, and we quickly reassessed the situation, realizing that setting off the fire alarm in a large office building in Manhattan would not sit well with other workers in the building. After failing to blow out the fire, an efficient water pour stifled the flames, and we continued the rest of the cooking process à la microwave.

After all the hassle this dish took to prepare, several team members consider this item their favorite on the menu. Complete with beans, the variety of meat tasted authentic and well-prepared. Team members did not add seasoning to this dish and felt it had all the correct flavors. Overall, both entrees tasted great to the team, and they finished most of both dishes.

Most of the snacks in the box contain fruity and sweet flavors. Our box had two pear fruit pate bars, which were a gummy-like substance covered in sugar. This was a sweet but yummy item, and the team consumed both bars. The energy bar had a texture that mimicked a more crumbly taffy, and the berry taste felt artificial. If you’re exhausted from a hard day of battle, it’s difficult to say if this would bring you back to full speed.

The fruit nougat bar had a sweet white base with an exciting texture and bits of fruit but was ultimately too sweet for anyone to take a large bite. The packet of plum jelly easily flows out of the packaging and pairs well with one of the biscuits. It was neither offensive nor a standout item.

For dessert, the box provides a bar of 65% dark chocolate that tastes pretty standard to any store-brand dark chocolate bar. The snacks were good enough but did not offer much variety in terms of sweet and savory. Perhaps adding a salty option would round out the menu.

After eating the French MRE, several team members mentioned that they felt lethargic and were in a brain fog for the remainder of the afternoon. While the intended consumers likely consume this ration throughout the day and pace themselves better than our team members, it is interesting to notice that a fuel-providing allocation puts consumers to sleep instead of getting them ready for a battle.

Compared to the Russian MRE, the French outshines, providing options every team member enjoyed. There were no items on the menu that tasted poorly, with the worst items being those that did not have enough taste or were too sweet. Part of this difference could be due to preparation, as team members did not heat up any entrees in the Russian MRE. However, the team confidently expresses that the French one consists of delicious items, many of which they would eat again.

It’s difficult to tell if the French MRE provides a viable option for those actually in active combat. Perhaps the French allocate too many of their military resources toward their food and not enough toward battle strategies. However, this ration provided nourishment and entertainment for a team of American taste-testers.