The Rundown on Anna Delvey and 281 Park 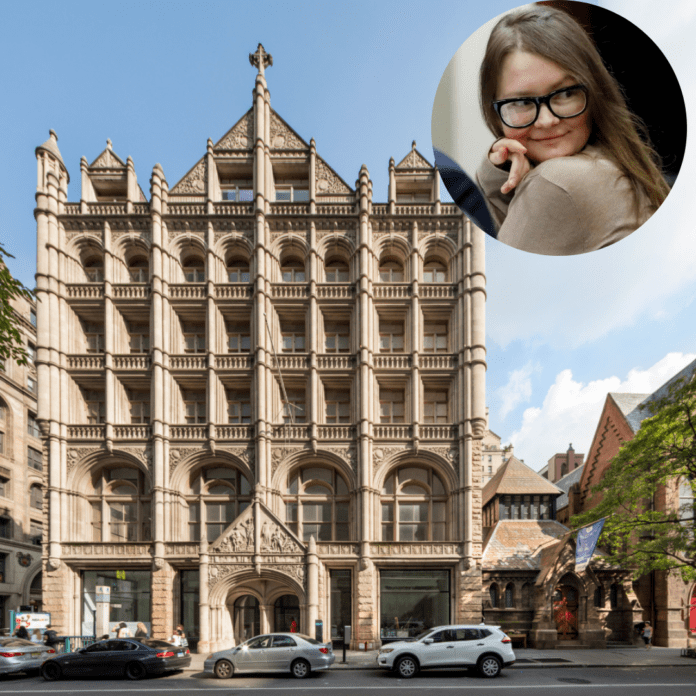 Netflix’s Inventing Anna has quickly become one of the most beloved shows of 2022. Though fictionalized, the miniseries is based on the real mystery of how Anna Delvey, also known as Anna Sorokin, was able to thrive in New York’s elite society via an intricate web of lies. One of the show’s driving forces, and Anna’s, was her hope of opening a social club in New York City known as the Anna Delvey Foundation. Let’s take a look at her business vision and the building it was supposed to be grounded in.

Who Is Anna Delvey?

First things first, who is Anna Delvey? Though it’s been one of this year’s hottest topics, we still don’t exactly know. The basics begin with Anna’s real name being Anna Sorokin, not Anna Delvey, as she introduced herself as in America. She claimed to be an heiress with millions of dollars waiting for an inheritance from her wealthy father. Armed with this backstory, Anna quickly became friends with high-profile individuals across New York, managing to go on extravagant vacations, attend the best parties, and fund a lavish lifestyle living in hotels for weeks at a time.

But behind the scenes, Anna was not a rich heiress – she was a German national who crafted an intricate web of lies and stories to borrow time, money, and resources. Eventually, Anna’s lies caught up to her, and she was charged with fraud-related crimes, including theft of services, grand larceny, and second-degree larceny by the state of New York. Perhaps the most interesting aspect of Anna’s story – the one that drives intrigue across the board – is how she did it.

How could she make it as far as she did? Morrocan vacations, privately chartered planes, all with essentially zero dollars to her name. Inventing Anna working in conjunction with a popular article by Jessica Pressler attempted to rationalize it all, but still, how could America’s brightest and most influential people and groups fall victim? Top financial companies, top socialites, and the hard to understand how has brought the why to the forefront. Why did Anna do it? That answer can be found in one of her driving goals, the Anna Delvey Foundation.

Lovingly referred to as ADF, the Anna Delvey Foundation was a dream crafted by Anna. As she climbed in social status while gracing the streets of New York, she acquired connections, muses, and faulty funding for the foundation. As the Netflix show describes, ADF was intended to be an exclusive social club with rotating artists and fitted with the finest restauranteurs and a small but extravagant hotel – all in one building. THE building, 281 Park.

Commonly referred to as the Church Missions House, 281 Park Avenue South is one of New York’s many historical buildings. Designed by two prolific architects, Robert W. Gibson and Edward J. Neville Stent, and nestled into Manhattan’s Charity Row, it’s easy to see where the intrigue stemmed from for Anna.

The building itself takes notes from medieval times, showcasing an eye-popping design, and at 33,600 square feet organized into six floors, plenty of space to occupy. Previous occupants included the namesake’s Episcopal Church Domestic and Foreign Missionary Society. The church occupied the building for decades as the Church Missions House before becoming a historical and leasable New York mainstay.

The building would eventually be passed off to the Federation of Protestant Welfare Agencies in the second half of the 20th century before the building changed hands again in 2019. But not to Anna Delvey as she desperately tried to make it a reality. Instead, the building went to a group that would share her bold dream of reclassifying 281 Park as an artistic, social space while Anna navigated her legal proceedings.

Anna’s New York dream began to crumble, as did the potential for ADF to become a reality, culminating in her arrest in 2019. As she was processed for her crimes, the building was rented out to another art-based company, Swedish Fotografiska. Similar but slightly less exclusive, Forografiska hoped to highlight art in conjunction with the company’s Stockholm location, bringing the unique perspective state-side. 281 Park is now said to have been remodeled while holding true to the original charm. The building hosts a bookstore, a café, a wine bar, and more, all highlighted with breathtaking, rotating art exhibits.

According to the company, “Fotografiska was built on the foundation of photography as a haven for inclusivity and free expression… Our goal is to inspire a more conscious world through the art of photography. We showcase the greatest photographers, whether they’re emerging artists or already established internationally.”

The reason for Anna’s obsession with having her social club’s home be at 281 Park is largely a mystery. Aside from the general attraction to the building, she had no significant ties to the building or was connected to its history at any point. However, New York City is a real estate hub boasting unique architecture and rich history in even the most unlikely of places. So, why was Anna obsessed with this building? There may be a few reasons, though the exact one remains a mystery.

The building sits in a notorious location, both in the general Manhattan neighborhood and on Park Avenue, but also unique is its spot on Charity Row. All closely concentrated around 281 Park are mega-charity brands, including the Xavier Society for the Blind, The New York Society for the Prevention of Cruelty to Children, and the American Society for the Prevention of Cruelty to Animals. Any brand that was set to take over the 281 building when it came up for lease in the 2010s would undoubtedly have inherent authority. For someone seeking validation, this could be the perfect opportunity for Anna to prop ADF up.

Inside and out, the building commands the attention of visitors, something that Anna Delvey was seemingly enamored with. In the show, we see Anna throwing lavish parties, borderline buying friendships by slipping appealing $100 tips, and so on. Anna wanted to be legendary, something she similarly desired for her foundation. What better way than choosing an exclusive, decadent building that hadn’t changed hands in decades?

Sure, some of the benefits are reserved exclusively for members, but Fotografiska does allow for public visits as well. Entrance tickets range in price depending on the visitor’s age and background but are not out of line with general pricing for New York exhibits. Inside, visitors can roam the numerous exhibits solo or bring a group along and receive a private tour for an additional price.

Anna’s hopes of opening a Soho House-like club are long gone, but Fotografiska offers a glimpse into what could’ve been. With a similar art-based approach, the Swedish breathes creativity and life into a building that has amassed a strong, historical foundation through the years. Though Anna will never have her Anna Delvey Foundation dreams realized at 281 Park, Fotografiska certainly brings whispers of that vision to life.

Previous articleContempt of Court: Is Trump Trumping-Up Valuations to Trump the IRS?
Next articleWhat is ERAP and How Does it Work?
YOU MIGHT ALSO LIKE
Beyond The Building