Black Civil Rights Leaders of the Past and Present 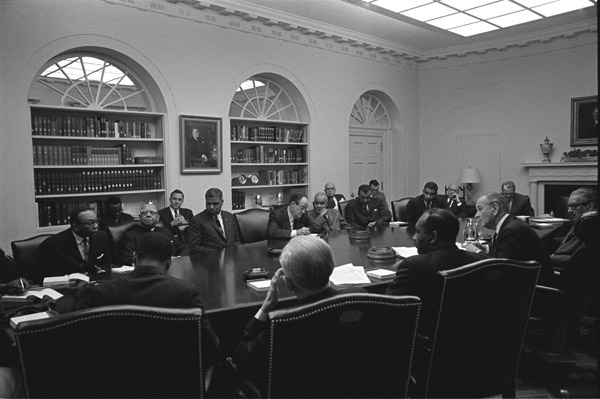 Throughout the history of the United States, there have always been voices that advocate for abolition, civil rights, liberation, and reparations. These brave men and women put their lives on the line so that the future might look bright and progress can continue. The sacrifices and work of these leaders must never be forgotten. Their words and actions still hold lessons on how to move forward. Today, we honor these leaders, so that the next generation might stand up for justice, equality, and equity.

One of the primary leaders of the Civil Rights movement, Dr. King is the guy everyone knows and is taught about in schools. While he is a beloved figure today, many people forget that he was considered one of the most hated men in America when he was alive. Dr. King advocated, not just for equal rights, but for the dismantling of capitalism, the distribution of wealth, and ending police brutality. He wanted white America to take a long hard look at themselves and the role they play in society. His work is foundational to many modern movements, as his writings and speeches continue to challenge the roles each of us plays in upholding unjust systems.

Another primary leader in the Civil Rights movement, Malcolm X was an advocate for black nationalism and black power. While considered much more radical than Dr. King, the philosophy of Malcolm X was rooted in liberation by any means necessary. This ideology was deemed “dangerous” to some but inspired many to get involved with the fight for civil rights. Malcolm X inspired people to advocate and fight for the life and justice they wanted to see.

An NYC native and advocate for the African American and Women’s movement, Dorothy Height has a lot of achievements under her belt. She worked with Eisenhower to desegregate schools, she helped organize the March on Washington, and she was President of the National Council of Negro Women. Her time as president of the NCNW was spent bringing together black communities from the south and the north to consolidate and share. A true powerhouse of the movement, she worked her entire life advocating for equal education and opportunity for the black community.

The first black woman from the deep south elected to congress, as well as the first congresswoman in Texas, Barbara Jordan advocated strongly for a minimum wage and equal opportunity employment. Both of these were hard sells, especially in Texas, but she got the job done. She then went on to work in the federal government, publicly admonishing corruption within the government, and advocating for more elected officials of color.

An advocate for black and gay rights, Bayard Rustin is another civil rights powerhouse who worked out of Harlem. He was openly gay in a time when that was illegal and was even arrested for it in 1953. However, his work and organization spoke for itself. He was integral to the March on Washington, he organized the New York City School Boycott of 1964 and educated others on intersectionality in both the Civil Rights movement and the Gay Liberation movement.

A Freedom Rider and major player in the Civil Rights movement, John Lewis fought for justice his entire life. He spoke at the March on Washington and led “Bloody Sunday,” the demonstration in Selma that met fierce police violence. This march was meant to highlight the issue that John Lewis spent most of his time in congress protecting: the voting rights of the black community. Seeking to increase black voter registration by eliminating laws that prevent the community from participating in democracy, John Lewis left behind a foundation to build a more equitable America.

Most people know that Ruby Bridges was the first black student to integrate into a white school in the south. However, many people don’t know that she later became a civil rights activist. Sharing her story with the generations that came after her, she uses her personal experience to advocate for voting rights and anti-racism. She inspires others to stand and fight for justice.

This civil rights lawyer is still in the game advocating for education, voting rights, and dismantling discrimination. Esmeralda is the Executive Director of the Center for Law and Social Justice at Medgar Evers College, and she uses her position, as well as her extensive experience with the Justice Department, to fight voter suppression and discrimination. She has helped countless people advocate for themselves and their rights.

The co-founder of Black Lives Matter, Patrisse has spoken extensively on the subject of prison abolition. Fighting the over the incarceration of the black community, as well as police brutality and accountability, she is one of the modern faces that keep the civil rights movement alive and well. Through countless, peaceful demonstrations, BLM has gathered thousands of members who know how to organize and advocate.

Fredrick Douglass is one of the most influential figures in American history. An abolitionist and early women’s rights activist, he spent his life fighting for freedom. Born into slavery, he learned to read and write, which was illegal to do. This education inspired him to teach others and advocate for the entire black community. He wrote many books, worked with many presidents, and traveled around the country advocating for civil rights.

These leaders are far from the only ones who have made, and continue to make, change happen. The people listed here have worked with countless others in the fight for justice and equity. As the fight continues, more people will rise to the occasion and inspire others. These leaders will build upon the foundation left for them. The fight for change is ongoing, but it is a necessary fight. When injustice persists in America, voices will rise up and call for change. That’s how it’s always been, and that’s how it always will be.

Previous articleWedding Customs Around the World: USA
Next articleWhat’s the Deal With Legal Weed in NYC?
YOU MIGHT ALSO LIKE
Beyond The Building