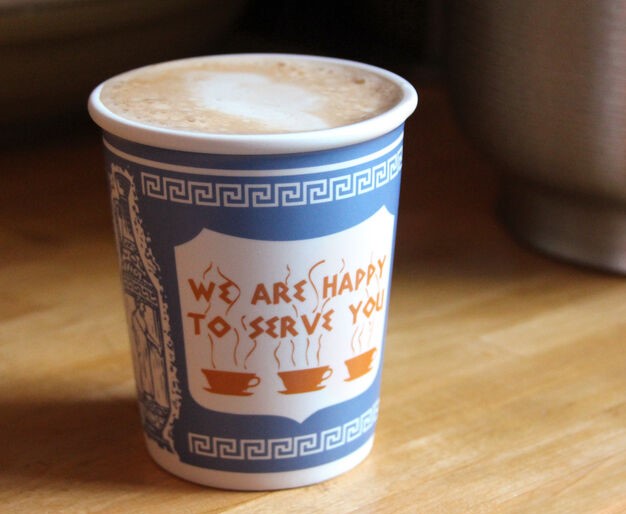 For most of us, the morning cup of coffee is a daily ritual. It’s what kickstarts the day. It’s that bit of time for ourselves, before the onslaught of tasks, emails, and meetings.

It’s that jolt of caffeine setting the cogs of our brains in motion.

For all these reasons and more, having the right coffee shop near your apartment is essential.

For most of the country, that’s a Starbucks: fast, efficient, and no surprises. In fact, there’s a phenomenon in real estate called the “Starbucks Effect” whereby housing prices increase the closer they are to one of the chain’s locations.

Like it or not, coffee shops (or lack thereof) have a large impact on their neighborhood and its real estate market.

However, here in New York, the best coffee is not found in mugs with a green siren on the side. Old-time New Yorkers know that the coffee to buy is found in cups with blue and gold greek lettering on the side.

It even has a special name:  the “Anthora”. For years, the blue, gold, and white cup has been a symbol of the city’s fast-paced hardworking culture. Besides, there’s something inherently heartwarming in the words “WE ARE HAPPY TO SERVE YOU” which are emblazoned on the side of each cup.

It’s how we prefer our “cup o’ joe” in the mornings – a bagel in one hand and a coffee in the other.  That’s why you’ll see the Anthora celebrated widely across the city, from local bodegas and gift shops to classic shows like The Sopranos and Seinfeld.

How The Anthora Came To Be:

The history of the Anthora starts in the late 1800s with a surge of Greek immigrants to New York City. This demographic shift was followed by a wave of Greek-owned coffee shops and carts springing up across the city, igniting a love of coffee in many.

The Anthora was officially introduced to New York in 1963. Leslie Buck, a Czech-American immigrant designed the first-ever “to-go” coffee cup in an attempt to attract the over 600 Greek-owned coffee shops in NYC. It was a genius marketing decision.

A scrappy, hardworking hustler, Leslie was the best person to introduce this coffee cup to the market. He had survived both Auschwitz and Buchenwald, while his parents and other family members tragically did not. Seeking a new life, he arrived in NYC and Americanized his name from the Czech, Laszlo Büch.

In the early ’60s, Leslie became the director of marketing for Sherri Cup, a leading cup manufacturer. In this role, he designed the iconic coffee cup, for which he is remembered today.

To find product-market fit, Leslie did extensive research on Greek culture before carefully tailoring the cup’s design to thrive in the NYC market. The name “Anthora” is Leslie’s mispronunciation of the Greco-Roman word “amphora” – an ancient container used for carrying liquids (you can see a picture of an amphora on each cup). The blue, white, and gold colors are a tribute to the Greek flag and the font is in Athenian lettering, both chosen to appeal to New York’s Greek population.

In the years after its release, the coffee cup became a New York City Icon. Sales skyrocketed. In 1994 sales hit an all-time high when Sherri sold upwards of 500 million cups. The Anthora began appearing in movies and television shows. In 2003, MOMA designed a ceramic version of the cup which they still sell in their gift store today.

Then, in 2005, with cup sales averaging around 200 million a year, Sherri was bought by Solo Cup Company. This decline in sales was due in large part to the influx of chains like Starbucks and other minority restaurants moving into the city.

The following year, Solo Cup made the decision to end the large-scale distribution of the Anthora, choosing to generate revenue by selling licenses to restaurants and souvenir stores.

Fortunately, things changed for the Anthora cup in 2015. The Dart Container Company, the owner of the cup, brought it back to New York City. They offered two different sizes of cups, the 8 oz, and the 10 oz, both of which can still be purchased in batches of 1000.

Given the decline in Anthora sales and the growth of Starbucks and other coffee retailers, the blue and gold cup is far less common than it was 25 years ago. Ironically, one of the most reliable ways to find an Anthora is to look in the gift section of myriad shops across the city. Additionally, many coffee shops use much cheaper knock-offs with subtle changes to the iconic design to hoodwink tourists. However, if you take the time to explore the city and try its local coffee scene it’s possible to find the real Anthora.

If you have the chance to drink your morning coffee from an Anthora, then make sure you take it. Support local businesses, actively participate in your neighborhood, and experience true New York City culture.