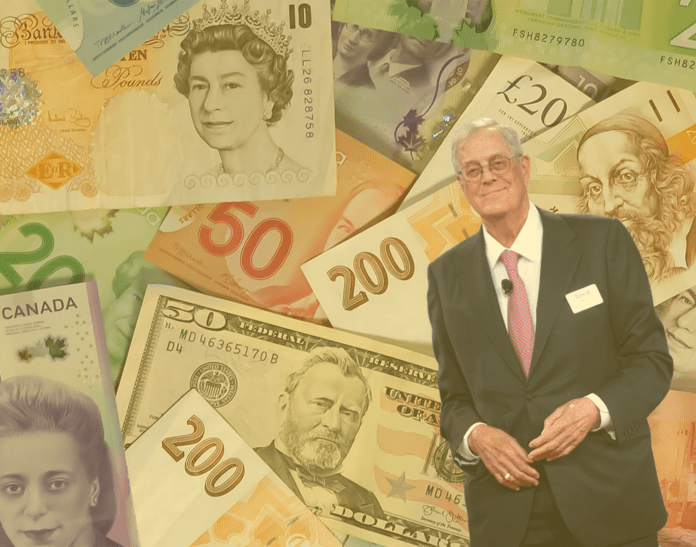 A 6-foot-5-inch force to be reckoned with, David Koch had the freedom to speak up about the causes he was passionate about. And because of his wealth, he was able to do it loudly and from a very large platform.

He started out in life a Libertarian, identifying strongly with the concepts and narrative of the politicians of the era. It was 1980; suddenly Koch found himself in the lofty position of being the nominated candidate of the Libertarian Party for Vice President of the United States. And although he knew it was a fight he’d never win, Koch enjoyed the game – and he really believed in the causes he threw money at. Election results notwithstanding, he became disillusioned with the party, and soon realized he identified much more with the Republican agenda. So in 1984, he officially changed his political affiliation to Republican, then spent the rest of his life supporting causes he believed in as they came across his path – sometimes Libertarian, more often Republican.

In 2012, even as the 4th richest person in the entire world, Koch learned the hard way that money can’t buy the Presidency when he spent over $100 million dollars trying to oppose the reelection of President Obama. In 2013, according to the same source, David Koch was the wealthiest resident in New York City, where he lived and worked for most of his life. David Koch was a political activist throughout his entire life. But politics was only one area of his keen, somewhat unusual interests. Let’s go over some background.

David Hamilton Koch was born in Wichita, Kansas, and was one of 4 boys, including a twin brother born 19 minutes later, Bill. They had two older brothers, Frederick and Charles. David graduated in 1959 from prep school at Deerfield Academy in Massachusetts and went on to graduate from MIT (Massachusetts Institute of Technology) with a bachelor’s degree in 1962, and a master’s degree in 1963, both in chemical engineering. He was on the basketball team at MIT, where he held the record from 1962 to 2009 for the highest points scored in a single game, of 41 points. A key player, Koch averaged 21 points a game over a 3-year period – also a record.

Koch joined the family business in 1970 under Charles and founded the NYC office. By 1979, David became president of his own division, renamed Chemical Technology Group. Koch Industries was the name of the family business, successful long before the Koch boys became men. Fred C. Koch, the father, started the company in 1940 after developing a cutting-edge refining process for crude oil. His decision to keep the company private was a key to its success, and though he eventually died, he left the holdings to his four sons.

Fred Senior had patented a method of oil refinement that enraged big competitors, constantly battling in court and never wanting his sons to be litigious in nature or to exhibit privileged laziness. Ironically, however, the legal battles ensued, and endured for two decades, plaguing the family and destroying all hope of any brotherly love that ever existed. David and his fraternal twin were in opposite camps, never seeing eye to eye.

The two brothers that actually did the work and ran the company, David and Charles, ended up buying out the other two brothers, Frederick and Bill, in 1983 for $1.1 billion, after a long and brutal legal battle. They then split equal portions of 42% shares in the business until David’s death, in August of 2019. Earlier in the year, in fact, in July of 2019, according to Forbes the Koch brothers (Charles and David) are tied for 11th richest people in the world, equally valued with an estimated fortune of $50.5 billion – each, that is. David Koch served as Executive Vice President of Koch Industries until his retirement due to health reasons, in 2018.

Two things happened in David’s adult mid-life that hugely impacted and changed him. The first thing was being aboard USA Flight 1493 in February of 1991, when it collided with another plane on the runway, killing over 30 people. David Koch was in fact the sole survivor in first class. The incident shook him to the core, resulting in his philanthropic efforts from then on.

The second event happened in 1992, with a diagnosis of prostate cancer that he battled off and on until his death, ultimately. Koch underwent radiation treatments, had surgery, and took hormone therapy, but the cancer kept returning. His personal war with cancer influenced him to help medical causes and fund research for different conditions from that point forward.

David Koch was an amazing man and a powerful force in the community. His unconventional political views supported smaller government and lower taxes, gay rights and same-sex marriage, a woman’s right to choose (abortion), and stem-cell research. He opposed the war on drugs and the war in Iraq, the Affordable Care Act, and the Consumer Protection Act, and did not believe in the dangers of global warming.

In his heart, he was a lover of the arts and culture and contributed mass amounts to historically significant institutions of culture and the arts right here in NYC. And because of his personal struggle with cancer, David Koch contributed over $200 million towards prostate cancer treatments and research and funded countless medical causes. Here are just a select few of his sizable contributions, according to Wikipedia:

These are just a few of the significant contributions chronicled. Indeed, the sheer amount of wealth David Koch gave away in his life was absolutely staggering; the man has had countless buildings, institutions, wings, and centers named after him as well. The prestige and class of this unique and privileged man is legendary.

With funds like Koch’s, he was able to also take hold of numerous real estate holdings, said to be estimated at least $143 million at the time of his death. Most notably was his residence at 740 Park Avenue in Manhattan, one of the most exclusive co-ops in the city. Koch lived in an 18-room duplex in the building he paid $18 million for in 2004.

Koch and his wife Julia (who met on a blind date in 1991 and have been married ever since) also purchased a $40.25 million townhome on the Upper East Side for ALL CASH.

Yes, you read that right.

Koch townhome on the UES

Originally they attempted to hide the transaction through a Delaware firm, but it soon came to light that they were the ones behind the purchase.

The couple has also lived at 1040 5th Ave, known as the Tennfort Corporation, in Jaqueline Kennedy Onassis’ old apartment, but moved out to 740 Park because they needed more space after their 3rd child was born.

Koch also had properties in Miami and Southhampton and while the Southhampton home is not on the market, one can move onto “Billionaire’s Lane” at 1100 Meadow Lane as there is currently undeveloped land for sale.

But no matter who will own Koch’s properties in the future, Koch will always be a large part of New York City, he was one of our own. David was a New Yorker at heart, he loved the City and considered it his home. Even though he’s gone now, he’ll not be soon forgotten.

(featured image adapted from Unsplash and “David Koch” by Gage Skidmore is licensed under CC BY-SA 2.0)

Previous articleWhat’s the Deal With Legal Weed in NYC?
Next articleThe Weird World of Sweeteners
YOU MIGHT ALSO LIKE
Beyond The Building